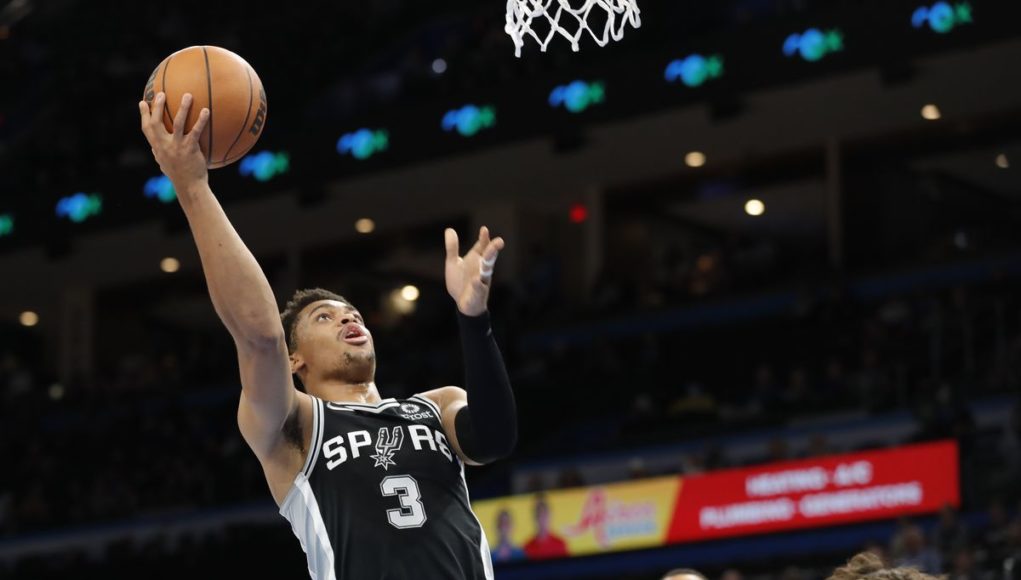 The San Antonio Spurs closed out a brief two-game road trip on Sunday night with a 99-94 loss to the Oklahoma City Thunder at the Paycom Center.

The loss was the seventh in the last 10 games for San Antonio, who defeated the Orlando Magic on Friday night.

“That’s a disappointing loss. OKC deserved to win, they played harder than we did. We lost the game in the second quarter,” Spurs Head Coach Gregg Popovich said.

Here are three standout moments from the Spurs’ loss to the Thunder on Sunday:

Maybe it was Daylight Savings Time or the haunted hotel in OKC but San Antonio could not buy a bucket in Sunday’s loss. The Spurs finished with just six three throws, shot 20 percent from 3-point range, and had a season-low 94 points.

The San Antonio Spurs missed 15 consecutive shots in the third quarter as the Thunder outscored them 34-14 in the period.

“We just need to do it together. We try to do it ourselves,” Spurs guard Lonnie Walker said of San Antonio’s scoring droughts.

One player who has really struggled is Derrick White. He went scoreless on Sunday night, going 0-for-10 from the floor. Despite averaging 12.5 points per game this season through 10 games, he has not reached double digits in four of those games.

The San Antonio Spurs will need to hope White’s funk ends soon because he is going to be a major key to the offense as the season rolls on into 2022.

A poor second half was the Spurs’ undoing in Sunday’s game. They entered the third quarter with a 10-point lead but were outscored 34-14 in the quarter. Overall in the second half, San Antonio was outscored 55-39.

The Spurs had no answer for Oklahoma City on defense as they converted easy buckets at the rim without Jakob Poeltl in to guard the paint and hit three big threes to extend their lead to 12 points in the late stages of the third quarter.

“We didn’t have that edge, that hunger going into the third,” Walker said.

The Spurs are now 3-7 on the season and will return to the court on Wednesday night to face the Sacramento Kings (5-5) at the AT&T Center at 7:30 p.m.