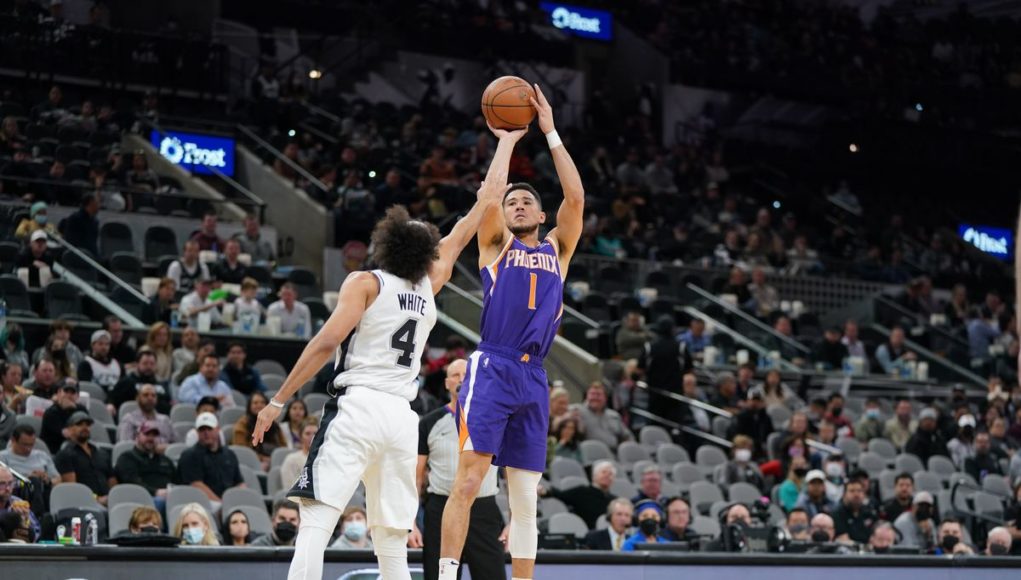 SAN ANTONIO — The San Antonio Spurs continued their homestand on Monday night, falling to the Phoenix Suns 121-107 at the AT&T Center.

The loss for San Antonio is their 28th on the season, putting them a full game behind the Sacramento Kings for 11th place in the West and 2 1/2 games behind the Portland Trail Blazers for final play-in spot in the Western Conference.

Here are three points from the Spurs’ loss to Phoenix on Monday:

Booker has no problem

Devin Booker gave the San Antonio Spurs all they could handle on Monday, pouring in a season-high 48 points, including 18 points in the opening quarter. He helped the Suns dominate San Antonio in the fourth quarter, outscoring them 34-16.

He finished the game 18 for 33 from the field and 5 for 13 on 3-pointers, easily leading the way for Phoenix.

Once again, the San Antonio Spurs struggled to keep a lead, losing it in the third quarter. Phoenix went on a run and quickly took the 84-83 advantage before clamping down on defense in the fourth quarter.

“We were up by 10 or 12 points in the third quarter,” Spurs guard/forward Keldon Johnson said. “They’re a very, very good team. They were in the championship last year, so they’re a very good team, very solid. We kind of shot ourselves in the foot a couple of times, had some bad turnovers and a couple of bad shots, but we were right there.”

Reenforcements on the way?

With the news of Zach Collins getting assigned to G-League, he is closer than ever to returning. That will be a welcome addition for San Antonio, who see Collins as someone that can bring a spark to the team.

“If you look at him on our bench, he’s doing the same thing for us,” Johnson said. “Night in, night out. Whenever he’s down here, he’s cheering, and he hasn’t even gotten to step on the court yet with us. Getting him back is definitely going to be great for us.”

The San Antonio Spurs are now 16-28 on the season and will return to the court on Wednesday night when they welcome the Oklahoma City Thunder (14-29) to the AT&T Center at 7:30 p.m.