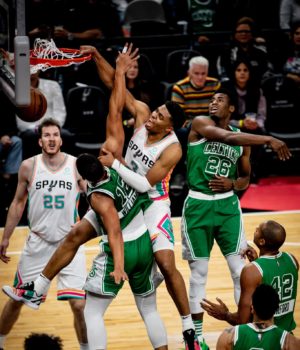 SAN ANTONIO — The San Antonio Spurs slammed away their six-game losing streak with a 96-88 victory over the Boston Celtics (10-10) at the AT&T Center on Friday night behind a big night from Dejounte Murray.

With the win, San Antonio improved to 3-6 at home as Head Coach Gregg Popovich moved within 21 games for the all-time wins record.

“I’m proud of their effort. It’s a group that’s always working,” Spurs Head Coach Gregg Popovich said. “The great thing about the win was that I think, we only made six threes. The grunt that they showed, the aggressiveness, and the desire were off the charts. I’m thrilled for them to be able to enjoy this.

Here are three standout moments from the Spurs’ win on Friday:

Dejounte Murray had himself a game on Friday night, including scoring six points during the Spurs’ fourth-quarter comeback. He finished with 29 points and 11 rebounds as the San Antonio Spurs closed the game on a 15-0 run.

Murray closed the door on the Celtics with a shot over Dennis Schroder with 15 seconds remaining.

Dejounte Murray drains the clutch jumper to seal the victory for the @spurs 🔥 pic.twitter.com/65xClT7qIq

Every practice, every game, every film session is a learning session for this team,” Murray said. “As you can see, it’s our first season really starting a whole new thing.. Everything is just a learning session. We just got to continue to stay together and just grow.”

Murray had help in Friday’s win as the Spurs got their come from behind victory. Keldon Johnson and Derrick White added 17 points each and Tre Jones had a career-high 12 points.

Can’t celebrate too much

The Spurs know they got a big win on Friday and they also know they can’t be happy with just that. Now comes the work on building off that win and putting together another solid night of work at the office.

“We haven’t responded well to wins all year,” White said. “We have to wash this out with a shower and get ready for a good Wizards team.”

The San Antonio Spurs are now 5-13 on the season and will return to the court on Monday night to face the Washington Wizards (12-7) at 7:30 PM at the AT&T Center.