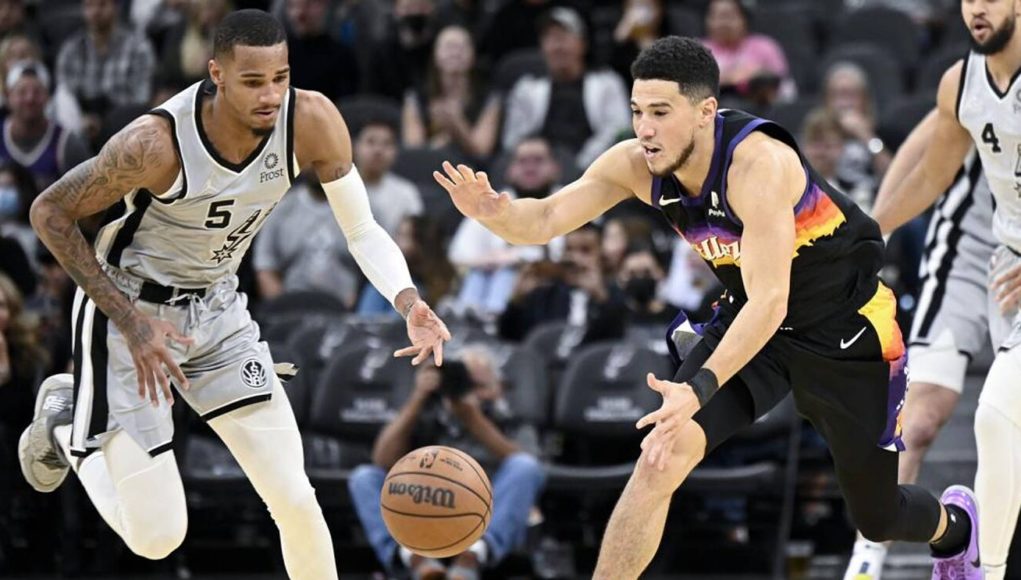 SAN ANTONIO — The San Antonio Spurs returned home on Monday night after a long road trip but that wasn’t a cure for their losing streak as they fell short to the streaking Phoenix Suns 115-111 at the AT&T Center.

The Spurs suffered their fifth straight loss overall and are just 2-8 in their last 10 games.

I thought we did a good job,” Spurs Head Coach Gregg Popovich said. “Making a lot of youthful mistakes, but as far as competing and executing, I was proud of them. They did a good job.”

Here are three main points from the Spurs’ loss to Phoenix.

The San Antonio Spurs have been ice cold from beyond the arc as of late and that’s a bad sign for today’s NBA. Monday night saw San Antonio 5-for-20 from deep as reliable flamethrower Doug McDermott was out with an injury.

Devin Vassell went 3-for-6 from beyond the arc with Derrick White and Lonnie Walker IV hitting a three each.

“Make shots. We work on it. It’s (about) translating it to the game,” Spurs guard Dejounte Murray said of his team’s issues shooting the ball from three-point land.

The Spurs struggled for a good portion of the game on Monday. Phoenix used a 33-24 second quarter to take the lead into the locker room at halftime but San Antonio used a 36-25 fourth quarter to stage a rally.

Why? Maybe it was the missed free throws or bad shooting night from three. Popovich said it all comes down to figuring out how to turn those losses into wins.

After a poor first half, Dejounte Murray put things together in the second half. He would finish with 18 points, 11 assists, and 10 rebounds for his seventh career triple-double.

He brushed aside that achievement with an expletive after the game but went on to say it’s all about his guys being confident.

We got to take them with confidence,” he said. “Shoot them with confidence, as I said. It could always be better from the start. My job, and we have guys like Derrick and Lonnie who can create, Tre Jones, who can score and compete. Everybody got to be ready to shoot at all times.”

The San Antonio Spurs are now 4-12 on the season and will return to the court on Wednesday to face the Atlanta Hawks (9-9) at 7:30 PM at the AT&T Center.