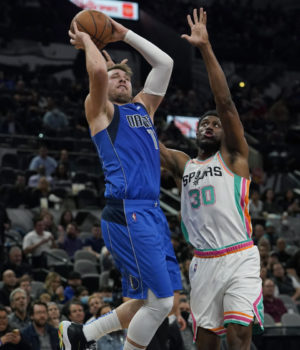 SAN ANTONIO — The San Antonio Spurs debuted their new fiesta jerseys on Friday night but that was the only thing for fans to cheer about as the Spurs fell 123-109 to the Dallas Mavericks at the AT&T Center.

The loss caps off the season series with Dallas, who swept San Antonio. It comes as San Antonio will hit the road for dates with the Lakers, Clippers, and Timberwolves beginning on Sunday.

“They had a good night,” Spurs Head Coach Gregg Popovich said of the Mavs. “You know, they made a lot of shots. But they deserved it, they were they were the more competitive, physical, aggressive group tonight.”

Here are three takeaways from the Spurs’ loss to Dallas:

A common theme in the Spurs locker room after the game was the team felt they were too complacent following their win over the Sacramento Kings on Wednesday night. San Antonio came into Friday’s game but were sloppy and played poorly overall, which included bad shot selection.

San Antonio had no answer for Luka Doncic, who posted a triple-double with 32 points, 15 assists, and 12 rebounds. Meanwhile, Kristaps Porzingis had 32 points to go along with seven rebounds.

“To me it’s a it’s a mental toughness exercise where you just have to realize everybody’s got to bring it every single night,” Popovich said. “Can’t get satisfied because you won a game, and the next game is gonna be the same way.”

Despite the loss, Devin Vassell seems to be finding his groove. He led the Spurs in scoring with 20 points on 54 percent shooting and went 3-for-6 from three. After the game, he agreed that the San Antonio Spurs got too comfortable after a win and need to start building on each performance.

“They made shots, but we can’t let people making shots deter us from being the team that we are, and I think that’s what happened,” he said.

The San Antonio Spurs are missing big man Jakob Poeltl and it is starting to show. Since he’s been out, San Antonio is struggling to defend the paint. That was the case on Friday as the Mavericks scored 66 of their 123 points near the rim, a season-high for the Spurs to give up.

The Spurs are now 4-8 on the season and will return to the court on Sunday afternoon when they hit the road to face the LA Lakers (7-5) at 2:30 p.m. from the Staples Center.