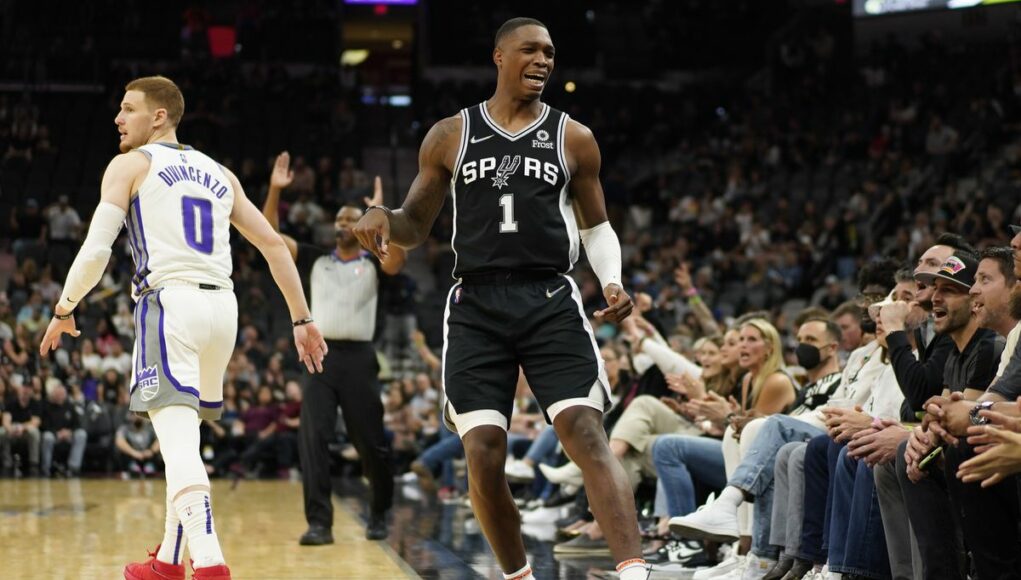 SAN ANTONIO — The San Antonio Spurs returned home to the Alamo City on Thursday night but would fall 115-112 to the Sacramento Kings at the AT&T Center.

The loss saw San Antonio drop to 2.5 games behind the New Orleans Pelicans for the 10th spot in the Western Conference, which is also the final play-in spot.

“They were down at half and got down even more in the beginning; the first three, four, five minutes, whatever it was in the third quarter,” Spurs Head Coach Gregg Popovich said. “They didn’t give in. They got back in it. That’s the good side. The bad side is you can’t win an NBA game playing 22 minutes.

Here are three main points from the Spurs’ loss on Thursday:

The San Antonio Spurs are a young squad. After falling behind by 19 points, the Spurs rallied in the third quarter, outscoring the Kings 31-24 in the period.

San Antonio went on a 22-3 run to end the third quarter and enter the fourth trailing 88-82.

“You’ve got to give them credit,” Kings coach Alvin Gentry said. ”If you look at what Lonnie Walker did, I thought he single-handedly kind of got them back in the game. And Dejounte, he’s a really, really good young player. Both of those guys played really well, but I thought we did a good job of staying focused and finding enough plays that could get us over the hump.”

The Spurs’ loss took away the big night from Lonnie Walker IV, who was a main cog in the San Antonio offense.

Walker had 30 points for San Antonio on 60 percent shooting and went 5-for-11 from three-point range.

“I’m building off what I did last game, and it’s the simple fact of my teammates letting me hoop and trusting me,” Walker said. “Dejounte Murray and Keldon Johnson, they’re always reminding me to stay aggressive and that I’m way too good to be chilling and relaxing. My teammates and my coaches instill an immense amount of confidence in me and let me just play freely.”

The record must wait

The San Antonio Spurs are now 24-39 on the season and will return to the court on Saturday to face the Charlotte Hornets at 6 p.m.