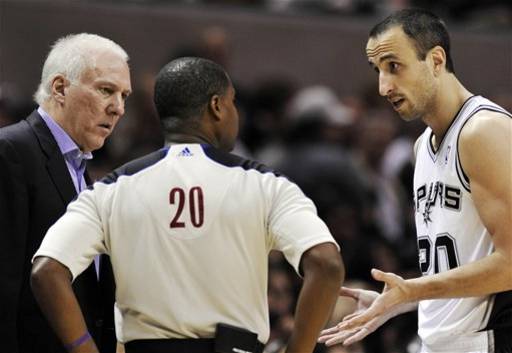 ars, even one of their stars. Manu Ginobili typed up a great story on explaining on CanchaLlena.com how cautious Gregg Popovich has been with him and the team and that he's done this very action before with no consequences.

Ginobili knows his limitations also, stating that he's 35 and his teammate Tim Duncan is 36 years old so they have to get the rest they can afford as a team. He also gives us an in depth description of his previous injury, which rightfully worried his coach during this mini travel tour. He didn't have balance or have confidence in his play up until playing the Nuggets two weeks ago.

Manu doesn't seem upset, but more disappointed at how the NBA is treating the Spurs with this schedule and action. He also wrote that the Spurs have been plagued by injuries so far, especially in the small forward position with Kawhi Leonard and Stephen Jackson. You can bet the Spurs will still be cautious, even if the NBA doesn't agree with it.