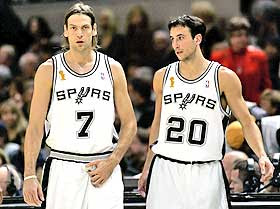 teammate Manu Ginobili may want him back with the team. Ginobili jokingly  tweeted to Oberto asking if he could get out of his current contract.

Una pregunta @obricio7… Tenés cláusula de rescisión?? Te traigo de nuevo, eh! (@manuginobili) (Question Oberto… do you have an out clause? I'd bring you back!)

While Manu is joking with Oberto about leaving his team, a dream come true going back to the first team that gave him a chance at being a professional basketball player, he's certainly having a good season so far.

Argentinean website, tn.com.ar, is reporting Oberto scored 18 points (9-10 FG shooting), 8 rebounds, and 7 assists in 26 minutes. Oberto was always known as a player who'd play with passion and energy and these statistics from his second game shouldn't be surprising. He's living a dream come true with what he's gone through and you could say returning to Argentina to play a sport he loves is somewhat of a "fairy tale ending" for him.

Check out highlights from Oberto and his team Athens de Cordoba.