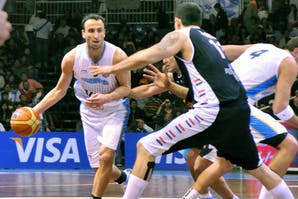 San Antonio Spurs’ Manu Ginobili returned to the court Saturday night as he helped the Argentenian national team defeat Paraguay 82 to 56 in Salta, Argentina (via Gerardo Fernandez of PrimeraHora.com).

Though the game was just an exhibition, it was the first time Ginobili was able to play competitive basketball after showing signs of almost full recovery from his arm injury he sustained with the Spurs.

Ginobili finished the game with 11 points and four rebounds. Andres Nocioni of the Philadelphia 76ers led Argentina with 21 points and seven rebounds. The Argentinian team knocked down 10 three-point field goals while Rockets forward Luis Scola and former Spur Fabricio Oberto did not play in the game.

Ginobili has been recovering from a broken arm he sustained on the last regular season game versus the Phoenix Suns. Ginobili played after missing game one against the Memphis Grizzlies, but it was obvious Ginobili’s arm limited him until the Spurs’ demise in game six. Ginobili recently tweeted a photo of himself practicing without the giant brace he used with the Spurs.

Ginobili and team Argentina will return to action tomorrow in another exhibition versus Basque Country.