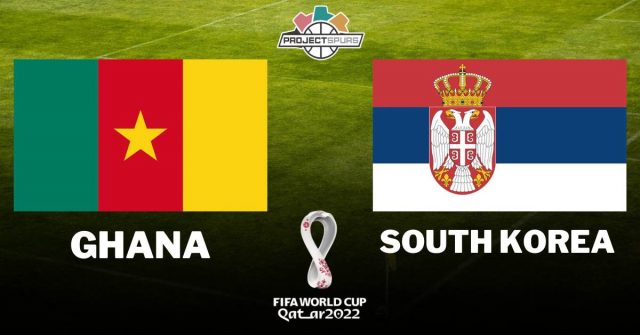 Ghana is coming off a close performance against Portugal. The African team almost pulled off another shocking upset at a major tournament in a 3-2 loss to Portugal. Ghana will look to rebound against a tough South Korean team. South Korea had a nervy 0-0 match with one of the dark horses in Uruguay. They will be hoping to get a massive three points in what looks to be a must-win for both sides.

Portugal and Uruguay will also be facing each other as well on Monday. This game could have big implications for the status of the group. This match will be extremely close to call and with so much on the line. Who will come up big for their respective countries?

South Korea has some quality players. This includes Tottenham Hotspur winger Heung-min Son and Napoli center-back Kim Min-Jae. Ghana is such a young and exciting team.

After battling it out against a strong Portuguese side, Ghana will now look to regroup. A win here would take a massive step toward qualification for the knockout stage. Many were impressed with Ghana despite the result. They went toe-to-toe with a Portugal side which many consider at its peak.

Arsenal Midfielder Thomas Partey is an important key for the EPL side, and the same can be said when he plays for the Black Stars. His composure and willingness to do the dirty work alongside his leadership makes him a quality player in midfield. The ageless veteran Andre Ayew was one of the goal scorers for Ghana against Portugal, with the former Swansea City man showing he still has something to offer on the biggest stage.

Mohammed Salisu also put in a good performance despite committing a questionable penalty on Cristiano Ronaldo during the match. This side was really being underlooked heading into the tournament, but after their first game, many people will now be backing Ghana to potentially make it out of this group.

Heung-Min Son and co. will hope to improve their points total to four as they look to potentially boost their chances of knockout stage football. The Koreans played to a tense 0-0 draw with dark horses Uruguay, who boast many talented names like Luis Suarez, Federico Valverde, and Darwin Nunez along with many others.

South Korea is not a team to be pushed aside, as they had a massive upset in the last world cup, beating Germany 2-0. The squad this tournament is considered better than the one in 2018, with so many different options in all areas of the field. Son and Hwang Hee-Chan are two forwards who can cause Ghana some problems, and with a solid midfield led by veteran Jung Woo-Young, South Korea could really fight for that second place or potentially top spot in the group. It is vital that they win this game, as they still have Portugal to play on the last matchday. Can Son lead South Korea to a knockout stage this time around?