Kevin Garnett’s fondness for trash talking is no secret around the NBA. The Boston Celtics power forward runs his mouth as much as anyone in 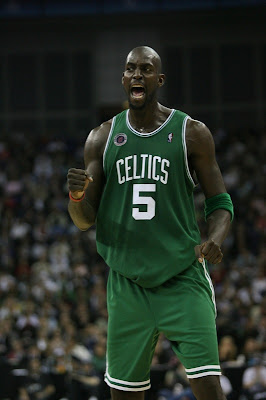 Most recently Garnett’s alleged comment about Carmelo Anthony’s estranged wife tasting “like Honey Nut Cheerios” inspired Melo to seek him out in the Celtics’ locker room after the game and even wait by the Celtics’ team bus to settle things.

Anthony’s actions after the game cost him a one game suspension, so it looks like Garnett gets the last laugh, even if he is a total… (insert your own special word here).

This isn’t the only time Garnett has gone too far with his insults either. San Antonio Spurs fans will surely remember Mother’s Day in 1999 when KG allegedly told Tim Duncan “Happy Mother’s Day, mother******,” knowing perfectly well that Duncan’s mother had died when Tim was a teenager.

Garnett and Duncan are both going to the Hall of Fame, and they’ll be remembered as the two greatest power forwards of their time. People will debate until the end of time who had the better career when all is said and done.

But how much is Garnett’s legacy damaged every time something stupid comes out of his mouth?

To me, it’s sickening. Talking trash about a member of another guy’s family is cheap and tacky and Garnett should be embarrassed by his childish behavior.

The history books may only remember the numbers that KG put up over his career, and that may draw eternal comparisons to Duncan, but people who saw the two play will remember TD being in a class by himself just because of the class act that he is.

As fans, we don’t get to know most of the things that are said on the court, so we only know a few of Garnett’s outrageous comments. It’s a shame he never has to answer to anyone for some of the things he says, but he’ll always have to deal with the blemish on his reputation that comes from being a classless jerk.

What do you  have to say Spurs fans? You know about his alleged remark to TD about his mom on Mother's Day so what say you about KG's trash talking?