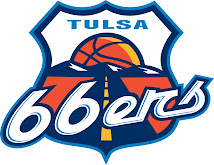 With the Tulsa 66ers in the Capital City tonight to play the Toros, I got a chance to talk to 66ers Nation‘s Kevin Henry to preview tonight’s game.

1. The 66ers seem to have plenty of talent on the roster to put points up on the board. Are you afraid that could stunt the growth of some prospects like Jerome Dyson?

There’s certainly a lot of talent on the 66ers roster. The thing that I’ve noticed about Coach (Nate) Tibbetts is that he does an excellent job with rotations and finding lineups that mesh together in certain circumstances. I really think that was one of the keys to Tulsa’s run to the D-League championship series last season. This year, with players like Dyson and Tweety Carter coming off the bench, I think Coach is one again working some magic and finding the right chemistry. You can tell that Dyson is just one of those versatile guys who can make plays when given the chance, and Coach is giving him that chance. I wouldn’t say that his growth would be stunted as much as he could really blossom playing alongside guys like Zabian Dowdell and Larry Owens.

2. Zabian Dowdell is a player the Spurs worked out a few times years ago when he declared for the draft. How has his development been going?

Tulsa said a lot about their faith in Zabian when they traded Mustafa Shakur to Rio Grande Valley and then traded their first-round draft pick (Scottie Reynolds). That was a clear to Z and everyone else that he was going to be “the man” at point this season. He’s has some solid games with all-around good numbers, and I think he’s really playing with a chip on his shoulder right now. He wants to get to the NBA so bad he can taste it. You can see it in his eyes and hear it in his voice when you talk to him. Coach told me a couple of weeks ago that he thinks Z has a good chance to be on an NBA roster, and I agree completely. We only saw Z for a very short time last season before he went to Europe, but he has come back from there with a focus this season and it’s paying off for Tulsa.

3. There are several interesting matchups for tonight’s game. Which do you think is more important, Dowdell vs. Johnson or Williams vs. Cousin?

I’ll go with the guard matchup simply because for Tulsa to go, Z has to go. If a team can slow down the point guard production (and we’ve seen it happen from time to time this season), the 66ers offense can struggle a bit. Latavious is an amazing rebounder and really has a knack for finding the ball off the glass. He hasn’t been a consistent scorer at this point, but his job is to control the inside. Tulsa doesn’t have a lot of height inside, so they rely on Tay’s athleticism to make up for that. Still, if you’re looking at all phases of the game and the importance of it to tonight’s contest, I go with whoever controls the tempo up top will help their team win.

4. The Toros and the 66ers haven’t had much help in the way of their NBA affiliates. With that in consideration, what are your thoughts on the season for the 66ers so far?

It was hard to know what to expect from Tulsa coming into the season. Only Larry Owens, Latavious Williams, and Marcus Lewis returned from last season, and a bunch of young guys were dotting the roster. Still, Coach Tibbetts has done a great job defining the roles for the new guys and they’re doing what he asks of them. At 8-6, I think they’re capable of playing better, and I think they will get better as the season goes along. They’re 2-1 against Iowa (which is 10-3 against the rest of the league) so they’ve proven they can play with and beat the top team in the league. Coach Tibbetts has told me numerous times that he thinks Robert Vaden has the chance to be the best shooter in the D-League. He’s struggled at times this season, so if he can live up to those expectations coming off the bench, that will be huge for Tulsa.

5. What’s your prediction for tonight’s game?

It’s the third of five road games for Tulsa, and they’re 1-1 thus far on the trip. Tulsa forced 20 Austin turnovers when they beat the Toros in Tulsa in early December. I don’t see that happening again tonight. I’m the Tulsa beat writer so it’s hard for me to go against the 66ers, even on the road in a tough place to play like Austin. I’ll say Tulsa escapes, 94-92.

Thanks again to Kevin for taking the time to answer our questions.