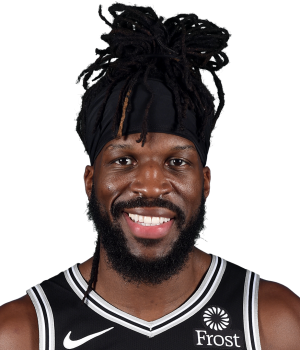 Over the summer, the San Antonio Spurs used their mid-level exception to sign forward DeMarre Carroll to a three-year, partially guaranteed $20.6 million deal. The previous summer when the Spurs gave Marco Belinelli a two-year deal for the mid-level exception, Belinelli turned into a rotation player off the bench.

Through two regular season games, one of the frequent questions I’ve received is ‘why isn’t Carroll playing any minutes?’

The short answer is it’s really early in the season, so Spurs Head Coach Gregg Popovich has 80 games left to figure out different lineups and rotations.

The long answer is that the two positions Carroll plays at are currently occupied by other players ahead of him in the rotation.

Over his last three seasons with Toronto and Brooklyn, Carroll has been primarily playing at the 3 and then his secondary position has been at the 4.

When looking at those two positions on the Spurs, here’s who Coach Pop currently has in the rotation through two games of the season.

The majority of those positions and roles could change aside from DeRozan and Gay. Those two players are two of the Spurs’ go-to options, so they’re going to be locked into their minutes. As for Gay, he may continue to come off the bench or Coach Pop could elect to start him at the 4, like he did at different times last season. This means Carroll is currently competing with Belinelli and Walker IV to try to pass them in the rotation if he wants to get minutes at the backup 3, or he can try to compete with Lyles and try to take his place as either the starting 4 or backup 4 if Gay starts.

For now, Carroll getting minutes is probably contingent on Belinelli or Lyles struggling in their role. This was the case Saturday night when Belinelli was struggling defensively, plus he was ice cold from three-point range for two games. The result was Popovich giving Walker IV his first chance of the season at the backup 3, where Walker IV played a few minutes in the fourth quarter. Carroll’s best chances of getting minutes will be on instances where Lyles or Belinelli continually struggle on defense. The same would apply to Walker IV if he passes Belinelli in the rotation and becomes the backup 3.

So far, Lyles has the best defensive rating of any Spur, where teams are only scoring 97.8 points per 100 possessions when he’s on the court. This is backed up by the defensive matchup data, where Lyles has only struggled when guarding Rui Hachimura of the Washington Wizards (8 points vs Lyles) and Marcus Morris Sr. of the Knicks (5 pts against Lyles). As for Belinelli, if he’s not knocking down 3s, he might see his role gone quickly. When Belinelli’s on the court, the Spurs are giving up 114.3 pp/100. The matchup data also isn’t kind to Belinelli, where he’s had trouble guarding Kevin Knox II (6 points vs Belinelli) and Davis Bertans (7 points vs Belinelli) through two games.

The last way Carroll could get some early minutes in the season is if Popovich wants to try out different lineups. Pop made a similar move in the fourth quarter Saturday, when he tried a new lineup of Dejounte Murray, Bryn Forbes, Walker IV, DeRozan, and Jakob Poeltl/LaMarcus Aldridge. If there’s a unique lineup Pop needs to try to stop the opposing team, Carroll could be used in that type of lineup.

For now, it’ll take time for the Spurs to see which lineups are working or not working, usually a 15-20 game sample size. It’s important to remember what happened to Dante Cunningham last season. The Spurs were in need of defense, so Popovich made Cunningham the starting 3 for a number of games. Once that lineup started to lose its effectiveness, Cunningham found himself out of the rotation for the remainder of the season. So, while Carroll might not be getting the initial minutes Belinelli got last season, in the long-term plans, he should eventually get his shot – whether that’s at the 3 or 4.