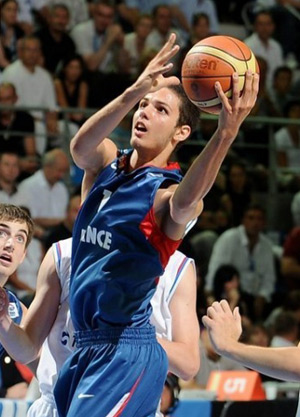 A 19-year-old French guard is trying to go from under-the-radar prospect to first round draft pick in the NBA Draft on June 28.

No, that paragraph was not borrowed from an article that originally appeared in the summer of 2001, when San Antonio Spurs guard Tony Parker went from unknown to sleeper pick for the Spurs.

But Parker’s nationality and rookie age are where the comparisons stop.

Evan Fournier, a 6-7 shooting guard from France hopes to find his way into the land of guaranteed contracts in the first round, but he looks at Manu Ginobili, not Parker as a role model.

“I don’t have a favorite player but I love his game,” Fournier told the Journal Sentinal during a recent workout with the Milwaukee Bucks.

While I’m sure Fournier would love to learn the ins and outs of the league from Ginobili himself, he does not have a workout scheduled with the swingman-heavy Spurs.

This isn’t the first time an NBA prospect has talked highly of Ginobili. Prior to being drafted by the Oklahoma City Thunder, James Harden talked about modeling his game after Manu’s and he is often compared to him even now.