Former San Antonio Spurs player, now with the Minnesota Timberwolves, Anthony Tolliver is ready to go to work in real estate should an NBA lockout occur. 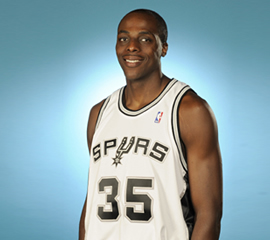 Tolliver majored in finance at Creighton University and has helped run a real estate business, Say You Can, LLC.

“Real estate has been something I’ve been interested in for a long time,” Tolliver said during a recent phone interview. Toward the end of his high school career, several of Tolliver’s friends became home and condo owners through purchases made with help from their parents. That initiated his interest in home ownership. While attending Creighton, located in Omaha, Neb., Tolliver felt that he had a future in professional basketball; he figured the ability to make a significant amount money and an understanding of how to manage it could make him successful in real estate.

Tolliver made about $213,000 during his time with the Spurs in 2008-2009 season and used some of the money earned to reinvest it into his real estate business.

So while some NBA players might feel a pinch in their wallets should a lockout occur, it would appear Tolliver will still generate income.

Way to be prepared Tolliver.