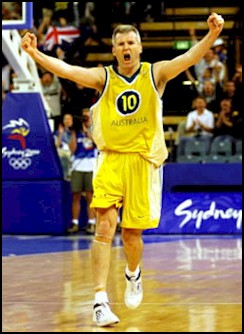 He's not only excited, but he also is giving us a look at what type of player and person Baynes is. In an interview with Smh.com.au, Gaze indirectly tells us how Aron will be a perfect fit to the team from the get go.

''They don't recruit dills…Personality and team ethos is just as important to them as the ability to make a jump shot or get a rebound. They don't tolerate stupidity or those who don't buy into their system."

Baynes seems to be the perfect player for this team with that description.

The Spurs are a team without ego and selfishness, something that's top priority with the organization and head coach Gregg Popovich. While we don't know how his skills will actually translate in the big stage of the NBA, Gaze gives us his description of Baynes' game for those who haven't seen him.

''He is a strong talent with good size and more importantly he has tremendous athleticism for a big guy and runs the floor really well."

The Spurs are always looking for athletic strong guys to help Tim Duncan out in the post.

The team has had trouble dangling around the back end of the bench with Matt Bonner and DeJuan Blair because they both bring in different qualities to the team. Baynes might bring in what both of them bring and may make the Spurs more dangerous with a solidified rotation, even if it's in the middle of the season.

Even though Baynes is coming into a situation with a new team and big expectations to help a team win a championship, he'll be around a core and team that's played alongside each other very well so he his transition can be smoother without having to do too much or carry the team.

Throughout the article, Gaze mentions this move as a "blessing from the hoop gods" for Baynes, but what's been reported so far, this seems to be a blessing for both sides.