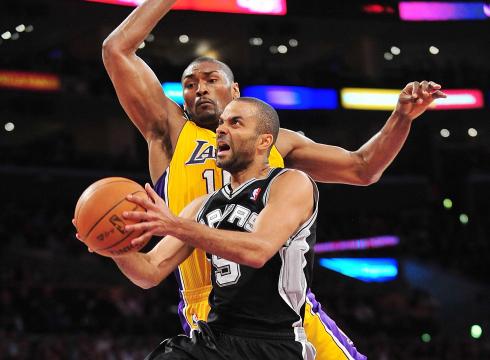 The San Antonio Spurs and Los Angeles Lakers may have gotten their first round series underway with San Antonio getting the win in game one but it is never too late to get in predictions from the experts.

For the past few years at the start of each playoff series, I ask a handful of bloggers and media members for their thoughts on the series and their predictions. Normally I get a mixed back of predictions, but for this opening-round series against the Los Angeles Lakers, it was a clean sweep of predictions for the Spurs over the Lakers.

I see the Spurs winning in five games. The Lakers will ride some emotion for a win at home, but are simply too shredded by injuries to outlast the Spurs.

I think we're in for a war. The Spurs are scrambling to regain their mojo and the Lakers are playing well with nothing to lose and no huge expectations after the loss of Kobe Bryant. But there are plenty of talented veterans on the Lakers like Dwight Howard, Pau Gasol and Steve Nash. I expect a gut wrenching, heart stopping series. Spurs in 7.

I'm not buying into this silly notion that the Lakers will not only push the Spurs, but pull the upset. Yes, the Lakers' finish to the season is noteworthy, but they lost Kobe. Let me repeat: THEY LOST KOBE. Spurs in 5.

Rey Moralde, The No Look Pass

There is still a huge disparity of talent and depth between these two squads. The Lakers might be playing well going into the postseason but, at some point, Pop will adjust and D'Antoni will continue to stick with a tight rotation that will catch up to him. Doubt Tony Parker will shoot 10 percent the entire series, anyway. Spurs in 5.

I find the media analysis of this year's playoffs to be rather frustrating. The folks married to numbers do their thing, the eye-test community does their thing… and they all seem happy to submit the same analysis of the Spurs: great team, Duncan has looked great, but they aren't for real. Congrats to LeBron.

I expect Miami to repeat, but I find the lack of respect for Pop offensive. Every year we play this game, providing just enough respect to avoid being critical and just enough indifference to avoid being insightful. The man may be the best coach in professional sports today, his teams consistently beat expectation, and I suspect they'll do so again in this year's playoffs. I don't believe the resurgence of Duncan is temporary. I don't believe this team lacks the health needed to compete in the West. I don't believe the Thunder are worthy of rank as heavy favorites over the Spurs.

I do believe the Heat – if honest – would admit they want no part of the Spurs in the Finals… and would happily take the Thunder over San Antonio to close it out.

The Lakers have Dwight Howard (Who has gotten better, but still far from the dominant force we saw in Orlando) and Pau Gasol, who played brilliantly since returning from injury, but that won’t be enough to compete against Pop’s squad. Steve Nash’s status is uncertain and the rest of the Lakers team is one giant question mark. Due to the Lakers not having many players who can create their own shot, poor guard depth off the bench, no one to defend Tony Parker one on one, and a coach that historically has gotten owned by Popovich, I have the Spurs winning in 5 games.