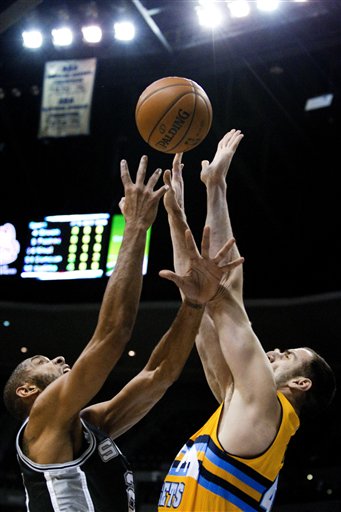 The above numbers were produced by San Antonio Spurs forward Tim Duncan on Wednesday in the Spurs’ 112-106 loss to the Denver Nuggets, just a day after the Spurs fell to the Oklahoma City Thunder.

The first, second, and fourth quarters were all competitive by the Spurs, but basketball is a 48-minute game for a reason as the Spurs’ most inefficient quarter Wednesday, the third, is what ultimately led to the teams fourth loss in five nights.

Manu Ginobili (16 points), Patty Mills (15 points), Tony Parker (13 points), and Tiago Splitter (10 points) did what they could as well, but the 12-minutes of the third where the Spurs were outscored 35-27 was just too much to overcome.

Here’s the rundown of the Spurs’ loss to the Nuggets Wednesday in which the team didn’t just give up after going into the fourth quarter down by 15 points.

Both teams came out scoring in the first quarter, but late in the quarter the Spurs managed to momentarily gain a six-point lead. Andre Iguodala (14 points) and the Nuggets would strike back quickly to tie the game in the final minute, but a Ginobili basket was the last to end the quarter. Though the Nuggets turned the ball over excessively, their ability to grab seven offensive rebounds gave them the opportunity to keep pace with the Spurs.

After taking care of the ball in the first quarter, the Spurs turned the ball over six times in the second as the Nuggets scored (mainly dunked) easy baskets off a majority of those turnovers. The passing wasn’t crisp on the perimeter for the Spurs’ wing players as their passes were usually deflected by Nuggets defenders.

The Nuggets continued to out-rebound the Spurs in the second, but the Spurs did do a better job in matching them as they were only outrebounded 13-10. Duncan had nine of the Spurs’ 17 rebounds by half.

The one constant element that kept the Spurs in the game was scoring 18 points from beyond the arc. Without the scoring of the three pointers, the Spurs might have found themselves down double-digits by the half. Five of the Spurs’ 10 players who saw action in the first half hit at least one three pointer in-between the two quarters.

The Spurs took much better care of the ball, but they struggled out in the open court to stop the Nuggets from speeding up the tempo on them. At one point, the Spurs had to go to the “Hack-A-McGee” as the team began intentionally fouling JaVale McGee (10 points) to slow the Nuggets’ offense down.

Though the three ball kept the Spurs in the first half, the Spurs’ bench looked gassed as they began to shoot three-after-three that looked flat shot after shot.  After attempting 11 three pointers in the quarter, the Spurs only connected on three of them.

Mills, Duncan, Parker, Stephen Jackson, Ginobili, Boris Daw, and Danny Green all did what they could in the fourth quarter to help the Spurs get the Nuggets’ lead down to three points late in the game, but in the end the Nuggets always found an answer whether it was a step-back Danilo Gallinari (28 points) three pointer, or Ty Lawson (12 points) drawing contact and going to the free throw line.

With the loss, the Spurs have now dropped their last four-of-five games. The team’s record falls to 19-8 on the season as the team is once again facing back-to-back losses. The team will fly home and will have two days off before resuming play against the visiting New Orleans Hornets on Friday.