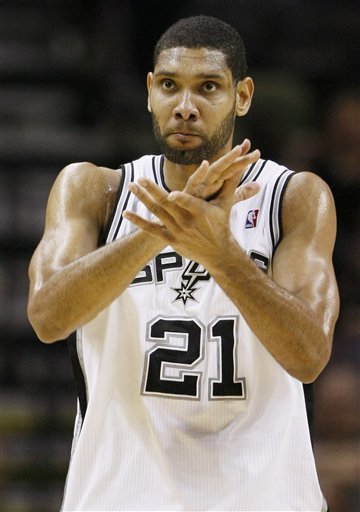 To keep their perfect home record intact against the Phoenix Suns, the San Antonio Spurs looked to the player that has done the most damage to the Suns over the last decade.

In a turn back the clock night, Duncan lead the Spurs with 24 points, 11 rebounds and two blocked shots in the Spurs 102-91 victory.

24 points is the largest point total Duncan has finished a game with since he scored 28 against Denver last December. It was also enough for Duncan to move past Gary Payton into 26th place on the all-time NBA scoring list.

“I always think he has it, even on the nights he doesn’t have it,” Spurs forward Richard Jefferson said. “I think it’s amazing how he gets all of those rebounds, blocks, and is just good on defense. He’s always doing a lot of things that probably never show up in the stat sheet.”

Duncan and the Spurs started slow in the first quarter, seeing the Suns score four straight points before DeJuan Blair got them on the board for the first time with 9:30 remaining in the opening quarter.

Blair’s turnaround jumper kickstarted the Spurs on a 14-2 run, punctuated by a Duncan runner to beat the shot clock. That Blair-Duncan combination made up for 18 of the Spurs 30 first quarter points.

When Duncan and Blair headed to the bench at the start of the second quarter, Tiago Splitter took over, contributing eight second quarter points on a pair of dunks, a layup and two free throws in just over six minutes.

“Splitter has played good for them in the past,” Suns coach Alvin Gentry said. “I’ve watched four or five of their games and what has happened is that when the second unit is in, the offense really goes through him.”

“He’s played pro basketball half his life so it’s not anything unusual,” Gentry said.

While Marcin Gortat matched Splitter’s eight points, the Spurs kept the lead and got scoring help from several players while the Suns kept drawing iron.

The Spurs kept chipping away in the second quarter, with Duncan and Tony Parker leading the way against Gortat and Steve Nash.

The Suns chipped away at the Spurs’ early 18-point second half lead by going on two third quarter rallies, but the Spurs still had a comfortable 10-point lead entering the fourth quarter.

“Well, obviously you know because I left him out there for quite a while,” Popovich said about his confidence level with Joseph. “He’s a young, energetic player who is willing to stick his nose in. For a sophomore in college, I think he’s pretty special.”

Joseph spent a majority of his time in the fourth quarter alongside Danny Green and Leonard, but it was Duncan who lead the Spurs with seven fourth quarter points.

While the Suns fought back and got within five points with five minutes remaining, the Spurs were able to get second and third scoring chances off of offensive rebounds to prevent Suns scoring opportunities.

Gortat lead the Suns with 24 points and 15 rebounds, both career highs, but after the game, Gortat praised the player who defended him most of the night.

“Obviously playing against Tim Duncan is a huge challenge. He’s one of the best post guys currently in the NBA if not the best,” Gortat said. “It’s always a pleasure to play against him and it’s always great to compete against him.”

“I’m always learning something new from each game I play against him,” Gortat continued.

With the win, the Spurs are now 9-0 at home and are 6-2 without Manu Ginobili.