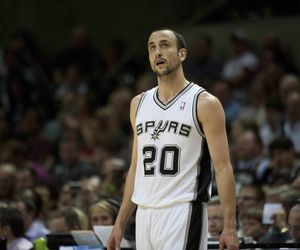 When we see San Antonio Spurs' Manu Ginobili throw fancy passes, we scream out his name or just look in amazement.
If you're on the receiving end of one, it's a different story.
With Ginobili, you don't know if or when the pass is coming. The new players who come to the Spurs usually need some time to get used to it while others who have played next to him their whole careers still can't time them right.
Apparently, not even the "Big Fundamental," Tim Duncan, is still used to them as he stated after the Spurs' win against the Philadelphia 76ers.
"Yeah, he hit me (with the ball) between the forehead today. I wasn't ready for it. You have to. He sees cracks and he sees plays ahead of time and he'll try to fit it in there. You have to be ready all the time."
Duncan's played next to Ginobili since Manu's rookie season in 2002-2003.
Ginobili's passes are always unique whether they are between the opponent's legs or a no look bullet pass that you don't know where it will end up going. It might be a high pass that ends up on your chest or a bounce pass that leads you to the basket.
For Duncan, it might even be one that'll hit you in the forehead before you realize who has the ball on the court. One thing's for sure about Ginobili's passes — nothing is for sure.