Don't think the San Antonio Spurs' 31-11 (third in the Western Conference) is pleasing enough for them, especially for 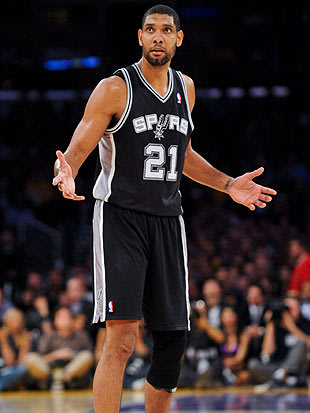 They're 18-2 home record is impressive, but they've been here before. They've played well at home in recent years and they've still gotten eliminated early on in the playoffs. Duncan is also looking at the other side of the equation in their road record. The Spurs are only 13-9 away from the AT&T Center and the "Big Fundamental" knows it has to improve.

"We have got to be better on the road. We did not do too well the last few times we were out there. We are going to try and clean it up and keep it going tomorrow," said Duncan.

The Spurs' may be a little satisfied right now with the record and level of play overall but, as coach Pop has said, that's not their objective for this season.

Most recently, the Spurs' woes in the playoffs came in the hands of the Oklahoma City Thunder when the Spurs went to play in OKC and couldn't match the Thunder's momentum they gained at home. The Spurs won't be satisfied until their record and play show a balanced attack and mindset in respect to where they're playing.

Duncan is still the leader of the team, so expect the rest of the team to follow suit on this. The team doesn't have much time to get into that groove, especially with a whole month of home heavy games in March. The Spurs play 14 games that month with only two games away from the AT&T Center.