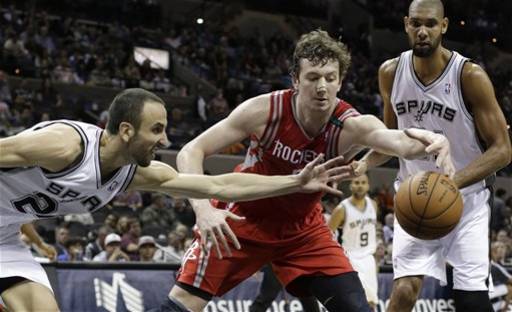 When the San Antonio Spurs dominated the Houston Rockets on Friday night, they didn't have a player who stood out from the ordinary. You had some great passes from Nando De Colo and a Tim Duncan dunk over Patrick Patterson (don't forget Matt Bonner throwing it down to the delight of everyone cheering the Silver & Black), but it was an overall team effort.

The superstars played a great game (Tony Parker: 17 points, 7 assists and Tim Duncan: 12 points, 12 rebounds), but the team didn't get a let down once the second string squad got in the game. The bench played great team basketball on both sides on the court and gave fits on both ends of the court to the Rockets starters. Here's what Tim Duncan had to say about the Spurs bench.

"I think all around, we're getting 10, 11, or 12 out there really focused on what they're doing on the court and making most of their minutes."

This is proven true by last night's game.

With the energy and intensity the bench had versus the Rockets, you'd think they could be a starting unit on an NBA team.

This chemistry is developing while the Spurs are missing their two small forwards, Kawhi Leonard and Stephen Jackson, and one can expect the team to play at a higher level with them on the court. The most interesting characteristic of the bench is they player looser and play a different running style than the running style the starters do.

With the starting unit you get Parker handling the ball the majority of the time and picking and rolling with a big and passing the ball if the defense collapses. The bench is so versatile that they each can play a different role the next possession. With point guards who can also play shooting guards and pass the ball along with bigs who can drive and pass when driving, the Spurs will be a difficult foe in the playoffs now that they had a training camp and full season to build chemistry.

Their contributions on the court are huge, but Duncan's analysis of the bench being focused is the most important attribute they have to have.