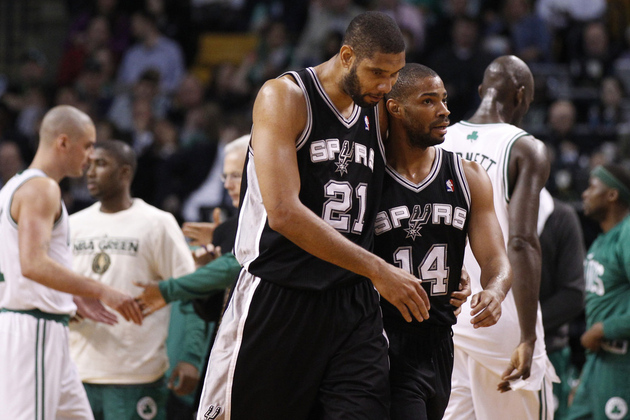 With the scare of Manu Ginobili's recent injury scare, the team will have to adjust a little until the star shooting guard returns to the San Antonio Spurs.

One of the main contributors off the bench is Gary Neal and although he has difficulty producing from the point guard position, he can help the team out making shots.

He's arguably one of the top pure shooters on the team and his production doesn't go unnoticed. Tim Duncan commented on Neal after Sunday's win against the Minnesota Timberwolves.

While Neal struggles handling the ball, his shot making does dim the hopes of the opponent's looking to win the game.

With the help of the rest of the team, he gets wide open three point shots and the team is playing better defense which helps keep or expand the lead they have. Neal filling in for a hurt Ginobili is the perfect situation for him.

He's not a point guard and neither a shooting guard because of his height, but playing the second tier bench players doesn't expose his liabilities as much. With the Spurs' depth, Neal helps Tony Parker and Danny Green sit out meaningless minutes during a game and prepares them for next game.

He may not be the best overall player, but the Spurs don't have much of that anyway. They have guys who can fill a role that the team needs to get a win and every player compliments each other while on the court.

Neal's play and minutes will be key for the Spurs being well rested for the playoffs and him adjusting to playing with different lineups will only help the team later on. Manu's injury may not be good news for Spurs fans, but it may be a blessing in disguise if Neal can contribute and the stars can rest a few more minutes than usual. this year.