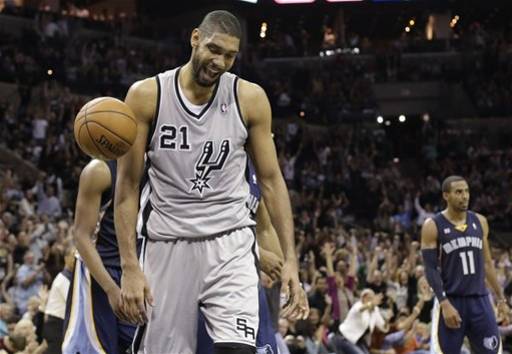 Tim Duncan didn't make the All-Star team for the first time in his career last season and he wasn't too disappointed either.

Instead of being disappointed at the fans and coaches not having him on the West roster, he got to spend All-Star weekend with his family. Duncan told Mike Monroe from MySA.com that he:

“I enjoyed it tremendously….I will not be campaigning."

This may be a huge disappointment for San Antonio Spurs fans, who like to be represented in the All-Star game. Tony Parker has a great chance of making it, but Duncan has always been a favorite of the fans to go since he's been the cornerstone of the franchise during their most successful years.

Fans should instead be encouraged about Duncan's attitude toward the All-Star Game. This is a game that's for the fans, mostly seen as "boring" with the players having too much fun out there, no defense being played, and there's no true level of competition for the majority of the game.

With Duncan's older knees, some rest may do him good. Spurs fans have been spoiled with the successful years the team has had and expect a championship in the end without caring how well the team does during the regular season if it doesn't amount to a title. This year the mindset of Spurs fans should be like Duncan's – rest wouldn't hurt at all during the second part of the season.

The rest of the main contenders (Oklahoma City Thunder, Los Angeles Lakers, Miami Heat) are going to be represented heavily in the game with virtually no rest while the majority of the Spurs core (all 30 or over in age) may rest up for a longer term accomplishment and probably playing it safe with injuries too.

The most important aspect for Duncan is his family and that's the main reason Spurs fans shouldn't be too caught up in him playing in that meaningless game in Houston in two months. With the fatigue coming quicker than in past years for Duncan, it'll be a good time for him to enjoy himself and bring more intensity to his game instead of burning out mentally witht he burden of basketball for a whole season like he used to do. His main goal at this point of his career became clearer with this quote.

“I wouldn’t complain if I’m not on the (All-Star) roster. I want to play well and want to feel good about what I’m doing on the court, but I am not going to be unhappy if I don’t make it.”

That's the quote Spurs fans should take to heart. He's said he knows his role with this team where he won't be the first or second option like he was during his dominant years. The most important thing on Duncan's mind is to think about what counts and (as any NBA veteran will say during the late part of their careers) that's NBA titles.

That's what Duncan is playing for and that's what Spurs fans should be cheering for. If Tim can keep the mileage low this season on his body, we could see some vintage performances again from him when it counts.