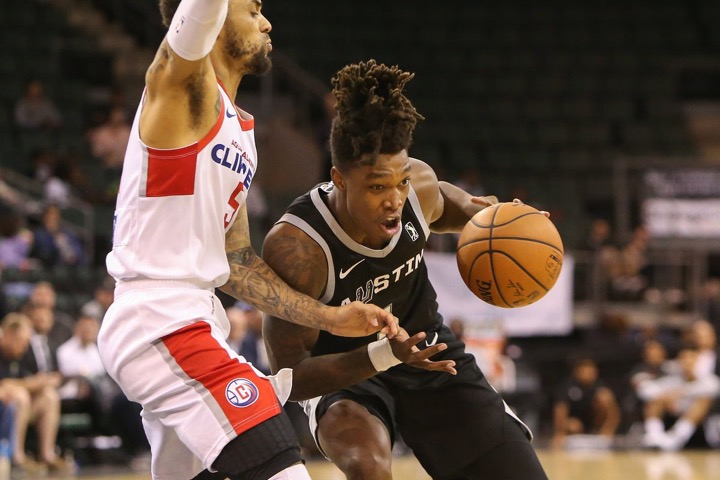 The San Antonio Spurs are down 2-3 in their first-round series with the Denver Nuggets as they head home to try and stave off an early elimination. Gregg Popovich has tinkered with the rotations throughout San Antonio’s five-game postseason run, but his adjustments just haven’t brought results as of late.

San Antonio didn’t shoot many threes during the regular season, but nobody was better at draining it from downtown than they were. While the first part of the aforementioned statement has held true during the playoffs, the Spurs’ three-point precision has come up egregiously short this series.

Patty Mills, Davis Bertans and Marco Belinelli were among the best long-distance shooters in the league this year, and they helped bolster the NBA’s 13th highest scoring bench.

Although Belinelli has raised his three-point accuracy to 40% this postseason, the rest of the trio has failed to eclipse even the 30% mark.

Marco may be enjoying an improved success rate from the perimeter, but the rest of his game has left much to be desired. Between his 38.7% shooting and 120 Defensive Rating, it’s difficult to comprehend why coach Pop would elect to keep such a liability on the floor for nearly 20 minutes each night.

After all, Davis Bertans almost immediately found himself in Popovich’s doghouse following a few poor showings early into the playoffs. So if Belli isn’t producing positive results, why reward him with consistent playing time?

Well, for one thing, we know Gregg Popovich is a man of fundamentals, trust, and routine. Marco Belinelli was an integral part of San Antonio’s last championship team, and he’s likely earned a longer leash with the coaching staff because of it.

With that being said, leaving Bellinelli in the lineup essentially ensures a handful of blown coverages and free points for the Nuggets. And in case you haven’t noticed, stopping the opposing team from scoring is paramount to winning ball games.

Rudy Gay has been a dud in the playoffs. He has averaged 8-8-2 in 24 MPG off the bench this series.

He should be a spark plug for the Spurs, instead he’s been a liability.

The difference between Rudy and Marco is Gay’s ability to stay in front of his man when engaged on the defensive end. Whether it is a matter of effort or aptitude, Bellinelli simply hasn’t been a serviceable defender at any point over the span of his 12-year career in the association.

Unfortunately, as Father Time has continued to eat away at his limited athleticism, the results have only gotten worse. With the series in jeopardy on Thursday night, Marco shouldn’t see extensive time on the AT&T Center hardwood.

Now that we’ve explored the Belinelli issue in great detail, let’s get into a possible solution to the problem at hand.

Lonnie Walker IV. Yes, the 20-year rookie fresh out of the University of Miami. The same 2018 San Antonio Spurs first-rounder who saw a grand total of 118 minutes and 17 games of NBA action in his first go-round.

I know it may sound ridiculous to posit that an inexperienced player such as Walker could make a huge difference for a struggling San Antonio team, but Lonnie might actually be an upgrade at the two-guard position. He’s long, explosive and a willing defender; Physically, everything Belinelli is not.

On top of his elite physical tools, the kid can flat out shoot the ball. Though his shooting percentages don’t exactly jump off the page, he possesses textbook form and made a huge splash in the G-Leauge for the Austin Spurs.

Truth be told, G-Leauge success doesn’t always translate to the next level. However, San Antonio is famous for developing raw talent with their Austin affiliate.

San Antonio’s rich developmental history aside, sometimes looking at the tape is all you need to see a player has that special something. Watch Lonnie’s tape, and you’ll find he has all the intangibles of a star in the making.

I’m not saying Walker is going to step in and dominate the Nuggets. In fact, I’d be surprised if he managed a single 20-point outing against the Western Conference powerhouse.

What I am saying is he has the potential to impact the game where the Spurs need it most; On defense. Like I mentioned earlier, he’s a willing defender with the length, lateral speed and quickness to bother even the best ballhandlers.

Just watch him patrol the passing lanes against the New Orleans Pelicans. He hounds the ballhandler, picks the pass, and turns defense into instant transition offense all by himself.

For a San Antonio squad that finished dead last in points off turnovers this season, they could sorely use any spark to create extra possessions. Especially considering their sputtering offense in the last two contests.

In all likelihood, Gregg Popovich will probably continue trotting out the usual suspects in the same lineups we’ve seen all postseason. Rookies rarely find a spot in the rotation and Pop isn’t afraid to give an unseasoned player the cold shoulder.

Pop from morning shootaround, and possible tweaks for Game 5: "You can’t change who you are by this time of the season. The basics of winning and losing still apply. Any adjustment in the world means nothing if the basics aren’t taken care of."

Still, playoff experience is invaluable for budding talents like Lonnie Walker. He may be ready to contribute or he may shrink under the spotlight.

We’ll never know what he’s capable of until he gets a chance to show his worth, but his poise and confidence suggest he’ll be eager to seize any opportunity that comes his way. Even if he fails, basketball is all about learning from your mistakes, and Pop is never one to shy away from teaching his young players a lesson.