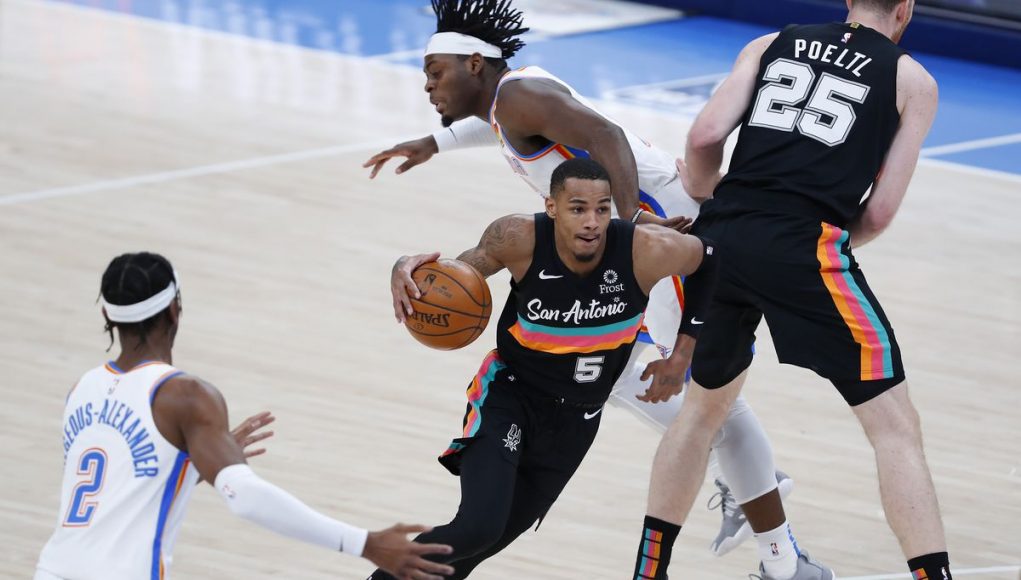 The San Antonio Spurs were shorthanded on Wednesday night in Oklahoma City but still put up a fight against a fully stacked Thunder squad. Unfortunately, Lu Dort‘s three-pointer as time expired lifted the home team to a 102-99 victory.

You can get a bet365 bonus code for info on the Spurs’ next few games against the New Orleans Pelicans and Brooklyn Nets, coming up on Saturday and Monday.

San Antonio played without DeMar DeRozan, who missed the game following the death of his father; Rudy Gay, Derrick White, Keldon Johnson, Devin Vassell, and Quinndary Weatherspoon all missed action due to health and safety protocol.

As a result, Luka Samanic earned his first NBA start due to San Antonio being so shorthanded. The Thunder started the game off by taking a 20-12 lead as the Spurs looked like a team that was shorthanded and rusty after not playing for nine days.

The bench unit picked things up as Patty Mills hit a pull up three-pointer to cut the Thunder lead to just five points with San Antonio closing the quarter by outscoring Oklahoma City 9-7 as the Thunder led 28-21 after 12 minutes.

San Antonio’s defense stepped up in the second quarter, allowing just 12 points from Oklahoma City and outscored the home team 24-12 in the period to take a 45-40 advantage into the locker room.

Shai Gilgeous-Alexander scored a career-high 42 points for the Thunder on the night, burning through the Spurs defense from all areas of the court. Dort and Al Horford each scored 16 points for Oklahoma City in the win.

LaMarcus Aldridge returned to action after missing six games with hip soreness, scoring 11 points and pulling down seven rebounds. Aldridge came off the bench for the first time since the 2006-07 season – his rookie year.

Trailing 97-90 with three minutes left, the Spurs went on a 9-2 run to tie the game. Patty Mills, Aldridge, and Lonnie Walker IV all had key buckets to knot the game up at 99 apiece with 3.2 seconds left. Mills committed a costly turnover, giving OKC the ball back for Dort’s game winner.

“I was real proud of them,” said Spurs head coach Gregg Popovich of the Spurs’ effort tonight. “They got tired down the stretch. The mistakes just added up.”

Dejounte Murray had 27 points to lead San Antonio while Mills added 15. Walker chipped in 12, going 3-for-4 from three-point range in the loss.

The Spurs are now 16-12 on the season and will return to the court on Saturday when they welcome the New Orleans Pelicans to the AT&T Center at 7:30 p.m.