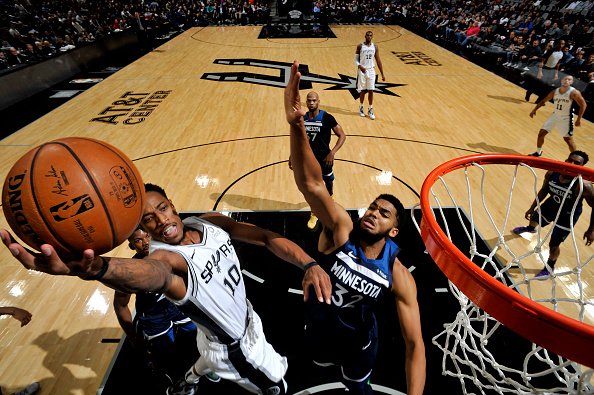 Five games into his journey as a member of the San Antonio Spurs, DeMar DeRozan is averaging 27.2 points, 7.8 assists, and six rebounds per game. The Spurs have relied on DeRozan not just for his own individual scoring, but, his ability to move the ball around and create for others too. He has helped guide the Spurs to an early 3-2 record.

In 190 minutes with DeRozan on the court, the Spurs narrowly outscore their opponent by 3.1 points per 100 possessions, according to NBA.com. In the 55 minutes when DeRozan has rested on the bench this season, the Spurs fall apart, as they’ve been outscored by a whopping 20.1 pp/100.

While DeRozan already came into San Antonio with a well-known offensive repertoire, he’s showcasing a skill defensively that is helping the Spurs in an area that was going to be a weakness with the loss of Dejounte Murray.

Let’s focus in on DeRozan’s playmaking and rebounding through five games of the season.

According to CleaningTheGlass.com, DeRozan is responsible for playmaking on 32.9% of the Spurs’ possessions, which ranks in the 98th percentile among wings. Only Zach LaVine of the Bulls has a higher usage rate than DeRozan as far as wings go.

What separates DeRozan from LaVine though is his ability to create for his teammates. DeRozan is assisting on 32.2% of his teammates made shots, which places him first among wing players in the 100th percentile. Right now, that’s basically a James Harden-level assist percentage.

When he needs to, DeRozan can go out and get a bucket for himself. Only 31% of DeRozan’s made shots this season have been assisted on, placing him in the 94th percentile among wing players. The only wings ahead of him are Evan Turner, Derrick Rose, and Rodney Hood in made shots that are assisted on.

Lastly, for shot creation, DeRozan gives the Spurs another weapon to put pressure on the defense alongside LaMarcus Aldridge, and that’s with DeRozan’s ability to consistently get to the free throw line. DeRozan has been fouled on 12.9% of his shot attempts, placing him again in an elite category among wings at the 90th percentile for drawing shooting fouls. Only Jimmy Butler, Caris LeVert, Lou Williams, LaVine, and Andrew Wiggins have a higher shooting foul percentage at the wing position.

With the injury to Murray, an elite rebounding guard, rebounds are available for the Spurs’ players on the floor, and DeRozan is making the most of those extra rebounds. DeRozan is collecting 15.3% of the opponents missed shots, making him an elite defensive rebounder at his position in the 94th percentile. Only DeAndre’ Bembry, Rodney McGruder, and Damyean Dotson have a higher defensive rebounding percentage at the wing position. DeRozan’s teammate Rudy Gay is also collecting defensive boards at a percentage that could end up being a career high if he maintains it.

While DeRozan doesn’t fit the mold of an all-around wing who can shoot from long range and be a lockdown defender, he still has the skill set that can help a team try to make the playoffs, and as evidenced by last season, he’s capable of being an All-Star and All-NBA player.

Statistics collected from NBA.com/stats and CleaningTheGlass.com at 8:30 PM CST on Sunday 10-28-2018.