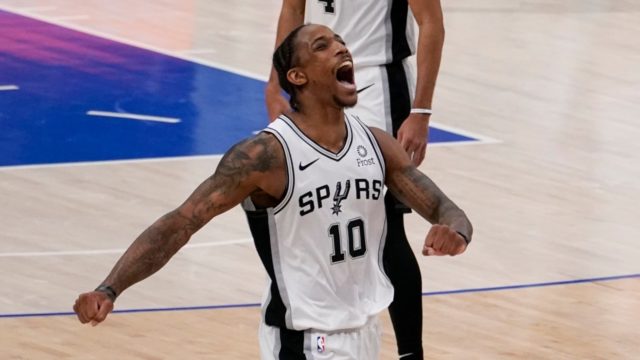 The San Antonio Spurs finally ended their season-high five game losing streak with a 119-117 victory over the Dallas Mavericks at the AmericanAirlines Center on Sunday night thanks to DeMar DeRozan’s jumper with 0.5 seconds left on the clock.

The win snaps a five-game losing skid for San Antonio, who had lost eight of their last ten coming into Sunday’s game.

“He’s got courage,” Spurs Head Coach Gregg Popovich said of DeRozan’s game winner. “He misses some of them, makes some of them, just like everybody through the ages. But he just comes back and does it again…Just like a hitter in baseball.”

Three Takeaways from the game

While DeRozan’s game winner will be the thing everyone at the water cooler tomorrow morning. You know, if water coolers still existed. Anyway, DeRozan came up big in a time the Spurs needed him to. He scored 27 of his 33 points in the second half as he led the Spurs on an 8-0 run to take a 113-104 lead in the fourth quarter.

“Honestly, just trying to get to my spot, knowing the clock, taking my time, not rushing, just going to a move I have worked on so many times, concentrate, knock down the shot,” DeRozan said.

Mavs superstar Luka Doncic may finished the game with 29 points but San Antonio’s defense on Doncic was key Sunday night as he was stopped from getting another triple-double against the Spurs after entering the game with three against the silver and black in nine meetings.

Doncic had five turnovers in the game, including one in the fourth quarter when the Spurs made their run. Overall, San Antonio’s defense against Doncic improved, a welcome sign for their head coach.

“It was great,” Popovich said. “There is no way you are going to stop him, but overall we were very active on him and made him work.”

The big news from Sunday’s game was San Antonio breaking out of their slump and finally getting a win. Following the game, the Spurs currently sit ninth in the Western Conference, just two games ahead of the 11th place New Orleans Pelicans.

DeRozan is hoping the win will give the struggling but young Spurs squad some confidence to close the season strong.

“You need that first snowball to kind of go down a mountain to start an avalanche – in a good way,” he said. “We are hopeful a game like this versus a good team that is ahead of us can kind of catapult us in the right direction.”