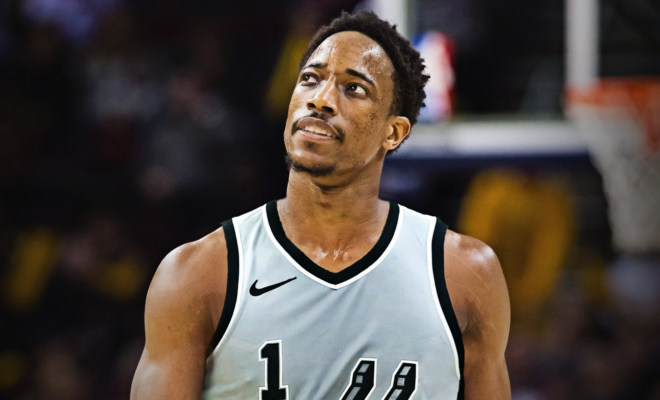 With the game on the line on Monday night, everybody in the AT&T Center knew that DeMar DeRozan was taking the last shot. He missed it in regulation, and then a few minutes later made it in overtime.

DeRozan has immediately established himself as the late game playmaker for the Spurs, and statistically speaking he is one of the most clutch players in the NBA this year. He has played six games with San Antonio and hit game-winning buckets in half of them. In clutch time (last 5 minutes with a differential of 5 points or fewer) DeRozan leads the league with 23 minutes played and 18 shots attempted, and his 21 points are second only to Kemba Walker.

“He loves those moments, he’s not afraid of failure,” said Gregg Popovich after the game. “Michael didn’t make every shot at the end of the game, there are very few people who want to be in that position all the time and he’s one of those people that loves it.”

Locked in a battle with a Mavericks team that wouldn’t quit, DeRozan took control of the game in the final three minutes of regulation. He posted up and knocked down a turnaround jumper over the defensively stout Wesley Matthews to tie the game at 96, then he spun off the left block into a close floater, but missed the open look.

WIth 2:00 left he stole the ball with excellent anticipation, ran the break, and found a cutting Patty Mills to tie the game again at 98. After Dennis Smith Jr. banged a three, DeRozan spun through Matthews and laid it in to bring the Spurs within 1. On his next possession, he spun into a leaning jumper at the left block, drawing a foul and hitting the free throws to take a 102-101 lead.

Aldridge screened off Wesley Matthews, allowing DeRozan to cut from the right block to the left elbow. He shook the other defender with a quick cut to the left wing where he received the inbound pass, faded left, and hit front iron. He remained on the floor for a minute as if to say, “I can’t believe I missed that.”

“Patty told me to go out there and win the game before overtime,” DeRozan said after the game. “I missed the shot and I told him I wasn’t going to miss the next one.”

DeRozan kept his word and didn’t miss at all in overtime. With 1:45 left he used an Aldridge screen to dribble into an elbow jumper, giving the Spurs just their second bucket of the extra period. A minute later he tried to post up on that left block again but almost fumbled it out of bounds. He recovered and drove across the paint from the left elbow to the right side of the rim, banking in a layup.

DeMar in the last two minutes of OT: 6 points on 3/3 shooting, including the dagger pic.twitter.com/vupFPWmKfe

Up three with 20 seconds to play, DeRozan dribbled patiently as the packed AT&T Center chanted in unison, “KILL! KILL! KILL!” (ok not really). He brought the clock down then dribbled to his right, once again at Wesley Matthews. DeRozan stepped back at the elbow, let it fly and stepped on the neck of the Mavericks, pounding his chest as the fans roared.

In the last three minutes of regulation and the last two minutes of OT, DeRozan put up 12 points on 5/8 shooting, plus a steal and an assist. He took the biggest shots late in the game, missing a few but more than making up for it. After another game that he took into his own hands to secure a victory, he was asked if he feels he needs to be the closer on this Spurs team.

“I don’t know,” DeRozan said while shaking his head and laughing a bit. “I just come in here and do my job.”