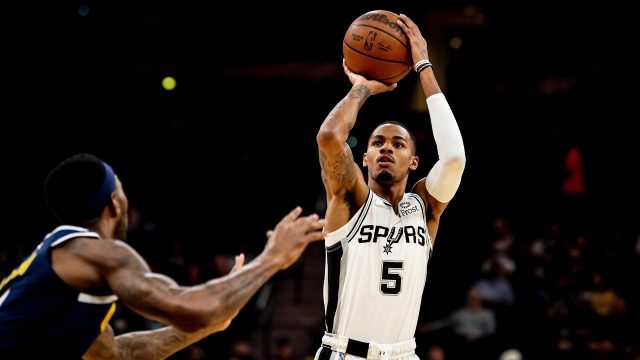 In previous seasons, we’ve seen the Spurs’ young core play more of a secondary role. Often in favor of more tried and true veterans whose production was a sure thing year in and out. But with the departures of DeMar DeRozan, Patty Mills, and Rudy Gay, the San Antonio Spurs had begun to shift philosophies. They had suddenly shifted from the blueprint of previous seasons to something less known. This shift was finally handing the keys over to the unproven young players. This suddenly had placed an enormous amount of pressure on the entire group to step up, and none more so than on Dejounte Murray.

The question for Murray going into this season was would he be able to step up and truly be THE GUY for the Spurs? Dejounte has shown flashes of his potential from time to time in the past, but had lacked the opportunity to really string any games together as the go to option for the team. However, with the departures of many of the veterans that accounted for much of the offensive production and leadership for the group, an opportunity had finally presented itself. In response to this enormous pressure and opportunity, Murray turned in an all-star caliber season and solidified himself as a franchise cornerstone going forward.

Because of all this, I thought it would be fun to do an in-depth breakdown of Dejounte’s season this year. Where did he improve this year compared to last year, and what’s the next step for him going into next season?

These are essentially the standard statistics most people look at when assessing a player’s performance. What immediately jumps out at you is just how much Murray stepped up his production from last season. Not only did his points and assists per game take a huge jump, but he also led the team in all these categories except for rebounding (where he was only just beat out by Jakob Poeltl). All these statistics are already impressive on their own, but when you look at more advanced statistics, Dejounte’s jump in volume and production gets even more impressive. And although he made big steps forward in all of these statistical categories, nothing was perhaps more impressive than his jump in creating for his teammates.

Often when players start to increase their volume, their efficiency begins to suffer. When you’re a role player, less is required of you than is required of a team’s star. You’re essentially only asked to take shots you’re given and make passes if they are there to make. But when you’re the teams’ go-to guy, you’re asked to do so much more. Not only do you have to start creating your own shots, but you also must start creating for others. So, naturally, when a player is asked to make a jump like that, it’s very reasonable to assume their efficiency will suffer as they start to force the issue more than they have in the past.

For context on how impressive that is, there were only four point guards (Luka Doncic is technically a point) with an assist percentage higher than Dejounte, all of them also had a turnover percentage higher than him. Murray went from a relatively low assist player to one of the best assist guys in the league this season all while taking care of the ball better than anyone else near his production.

Immediately, one thing that jumps out when looking at these charts is his increased volume from three. With his increased responsibility on offense, it makes sense that Murray was asked to take and make more threes than before. And although Dejounte has never been known as a sharpshooter, this increase in volume has allowed him to find his sweet spots from deep. He shot extremely well from both wing spots on the floor, where he shot 35.3% on the right and a whopping 40.8% on the left. From a macro perspective, with his three-point percentage only being 32.5%, it paints a picture that Dejounte is just not a good three-point shooter in general. This is because there are still spots from deep he struggles from, and those low percentages cancel out his strong spots. Dejounte specifically struggled from the top of the key (20.5%) and the left corner (27.8%). If he could improve in those two areas specifically, he could become an extremely reliable three-point shooter that is especially deadly from the wings.

Another thing that jumps out is just how deadly he is from mid-range, specifically the free-throw circle where he shot extremely well. Dejounte has shot around 44% from the mid-range area over the past 3 seasons, so although his accuracy has not necessarily changed, his volume has been climbing. Murray shot 1003 attempts from mid-range during the 20-21 season and 1320 attempts during the 21-22 season. To shoot roughly 300 more attempts in a season and not suffer any drop off in accuracy just as a byproduct of being asked to shoot more is a huge improvement.

One last thing to take note of is his jump in ability to create his own shots. In the table above, you can see the ASTD% category. This is the percentage of his shots made that were assisted on. In the previous season, you can see that the percentage of his makes in the mid-range (arguably his strongest area of the floor, because Spurs) were assisted on 23% of the time, which is below the league average for his position group. That percentage dropped to just 12% this season. Meaning that 88% of the time, Dejounte was simply creating his own makes from mid-range. When you take that into account alongside the fact that Murray didn’t suffer any drop-off in accuracy, it becomes even more apparent how big of a step Dejounte took this season.

So, what’s next for Dejounte going into this upcoming season? It feels like the most obvious answer is upping his three-point percentage. This feels like a big ask, but Dejounte has shown the ability to consistently add to his game every year, and the Spurs are one of the best in the league when it comes to player development, so this feels relatively achievable.

Also, another thing became apparent this season as Dejounte took his leap into stardom, he needs a co-star if the Spurs are going to take that next step. So where does this hypothetical star come from? Do the Spurs take a swing at someone in free agency? With the Spurs having three 1st round picks in this year’s draft, do they make some noise there? Or is the answer in their own backyard and it’s someone else’s turn to take a Dejounte-like leap in development? With the draft coming up and free agency following soon after, it feels like we may get that answer relatively soon.