Defense. The Spurs are built on this since the arrival of Gregg Popovich and during the Tim Duncan era. Spurs fans have seen the Spurs lead the league in defensive statistics, seen the defensive prowess of David Robinson and the intimidating duo of Duncan and Robinson aka “The Twin Towers.”

Both known for lock-down perimeter defense but which one was the better defender?  Let’s look at the tale-of-the-tape and you decide.

Drafted by the Spurs with the 7th pick in the 1984 NBA Draft, he played with the Spurs from 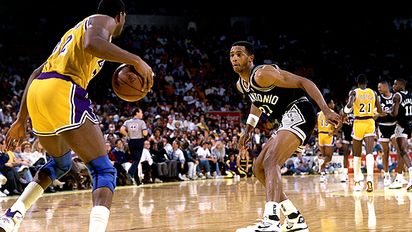 Also, during his time in the NBA he had to guard the likes of Magic Johnson, Michael Jordan, and Isiah Thomas.  He held the record for most consecutive games with a steal until Chris Paul of the New Orleans Hornets, broke the record with 106 ironically against the Spurs.

Robertson, while with the Spurs, led the team three times in averaging more than three per game. He finished with 1,129 steals while in a Spurs uniform.  Second all-time.

How good was Robertson on defense?  Look at this!

Signed by the Spurs in 2001, Bowen joined the team not known for his offensive skills but for

Bowen’s defense on the perimeter established him as one of the best in the NBA. It was common for him to guard the likes of Kobe Bryant, Vince Carter, LeBron James, Ray Allen and Carmelo Anthony.

However, he also established a reputation as being a “dirty player.”  He kicked Wally Szczerbiak in the face during a game, had run-ins with Ray Allen, Amare Stoudamire, Steve Nash, Chris Paul, to name a few.  He was also accused of getting into jump-shooters space and in particular, under their feet when they landed. Perhaps it was this reputation that caused Bowen to never win a Defensive Player of the Year Award.

But for much of his bad reputation, there is no denying he was a critical piece to the Spurs championship teams. Without him, the Spurs probably don’t win the NBA title in 2003 without his three-point onslaught on the Lakers, in 2005 for his defensive efforts against the Pistons, or in 2007 with his defensive effort on LeBron James.  He played for the Spurs from 2001-2009, where he retired a Spur.

Well there you have it Spurs fans. Two great perimeter defenders in Spurs history but only one can be crowned the best. Who is it going to be?  Leave us your comments and go vote on the poll.