Mark Cuban, San Antonio's honorary punching bag since owning the Dallas Mavericks, decided to give his opinion on the controversial ruling by 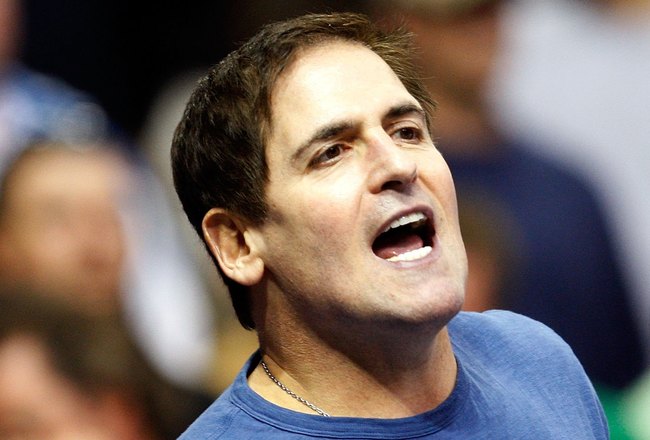 NBA commissioner David Stern against the San Antonio Spurs for sending their stars home before a nationally televised game against the Miami Heat. Here's what Cuban said to the Star-Telegram:

"Everybody who planned to watch San Antonio vs. Miami on TNT, we've got disappointed customers all over the place," Cuban said before Saturday's Mavericks home game against Detroit. "When I say our biggest customer, TV is our biggest customer. So I'm not saying San Antonio did the wrong thing. I'm just saying I understand exactly why the league did what they did."

He's absolutely right! Unlike David Stern's position that the fans in attendance got the short end of the stick, Cuban is talking about the (most likely reason) Stern was angry about the situation: the NBA is discussing TV deals and the marquee match up for the night was in danger of losing ratings.Cuban is a very smart man and is a great businessman, you don't get to be a billionaire unless you are. The problem with his statements isn't necessarily on the business side but on the basketball side.

Spurs head coach Gregg Popovich's decision wasn't to insult TNT or the NBA, but to rest his star.They were coming off a long road trip and were on the last game of two consecutive back to back sets of games. His aging core of Tim Duncan (36) and Manu Ginobili (35) were on weary legs during the trip, so it made sense resting his stars. The question's been asked, "Why didn't Pop just rest one each game during the road trip?"

That's a fair question, but with the schedule giving San Antonio sub par teams (Toronto, Washington, and Orlando) it only made sense to win the games they were supposed to win while sitting his stars during a game that was a toss up with the defending champion Miami Heat. If the Spurs would've sat the Big 3 during the first three of four games and went 0-3 while beating Miami, wouldn't the San Antonio Spurs fans be at a "disservice" by their team?

We have to remember the most important factor in all this: a given team is responsible to their fan base, not anyone else's. By a team doing that, that team is also doing their owners justice because the money is going to them and the organization. This was strictly a basketball move and it shouldn't surprise anyone that just about every coach that has commented on it didn't like the fine or was disappointed by it, like Gregg Popovich and Boston Celtics head coach Doc Rivers.

This was a move made by the NBA, an organization that says it cares about its fan base (except fans that go to games at the end of the season because Popovich did this exact thing when the Spurs played the Phoenix Suns last year). If all things are taken into account, Cuban should be ranting about David Stern's bad decision instead of applauding it.

From a business standpoint, shouldn't have Stern wanted a fresh San Antonio team playing a fresh Miami Heat team during the main game of the night? Why not schedule the two back to back sets at another time to watch a competitive game or move some of the games to the end of the season while having the Spurs play Miami during a lighter schedule? If you were to ask Cuban these questions, he might give you a different answer. His team has rarely sat stars during the regular season,which has resulted in an often injured Dallas Mavericks superstar Dirk Nowitzki If you go way back in time to the 2003 playoffs, the Mavs star had a knee injury during the playoffs and his coach sat him even though he was seen as being able to play.

That decision was seen as a brilliant one by then head coach Don Nelson because it prolonged Dirk's career and kept him playing at a high level. The playoffs are nationally televised, so why wasn't Cuban fined? Weren't the Mavs fans given a “disservice” when they probably could've won an NBA championship?