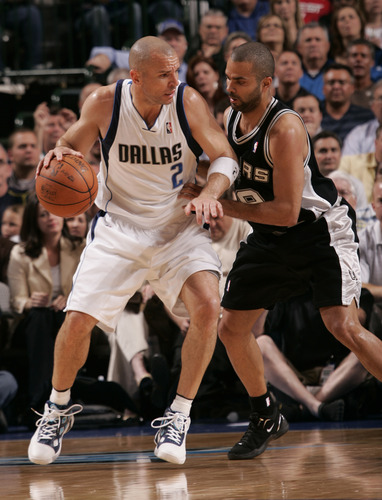 The last time Jason Kidd was mentioned as a potential free agent target for the San Antonio Spurs was  in the 2003 offseason after Tony Parker underperformed against Kidd in the NBA Finals.

Kidd was a waking triple-double then. Now he is nearing the end of his career, and like a responsible veteran, he’s letting everyone know he may be ready for a backup role. The 39-year-old unrestricted free agent is putting up numbers well below his career averages and now it’s a question of whether or not he can contribute to the Mavericks or any other team.

Kidd said he’d be willing to back up Jeremy Lin, Deron Williams or Steve Nash, hinting that he would go to New York, Brooklyn or Phoenix, or possibly have one of those point guards join the Mavs. It’s no secret that Mark Cuban really wants to bring in Williams and I’m sure he wouldn’t mind having Nash back in Dallas. Either would be just fine for Kidd.

“I just want to help a team win,” Kidd said. “I have been very fortunate. The game has been great to me, so wherever I can help a team get to the next level that’s what I want to do.”

Kidd’s contract paid him more than $10 million last year, but he’ll obviously be taking a huge pay cut in his next one. For the right price, would it be beneficial for the San Antonio Spurs to have him back up Tony Parker?

It might be worth taking a look at, but I have to say no. At this point, what you’re paying for with Jason Kidd is veteran leadership. He’s a guy that will give you a few solid minutes at point guard, but he’s not going to fill up the stat sheet anymore.

The Spurs don’t need another old guy joining the team. They have all the veteran leadership they need from Duncan, Ginobili and Parker.

If you ask me, the best fit for Jason Kidd would be to go to the Knicks and play behind Jeremy Lin. Lin is talented but could learn a lot from a guy like Kidd, who’s been around the league for a long time. Kidd could help Lin play with more focus and cut down on turnovers, perhaps turning him into a legitimate NBA point guard.

While it may be tempting for the Spurs to look at a guy like Jason Kidd who’s had such an amazing career, I don’t think he’s got enough left in the tank to help next season.