If there’s one thing the lockout has provided, it’s time to look at useless but very fun arguments like who would win if I loaded the 2010-2011 San Antonio Spurs and 1999 NBA Champion Spurs into NBA 2k12 and played a game. This is a fun exercise because of how different the styles of play are between the two teams.

The first Spurs title team was the foundation on which the Gregg Popovich era was built. Defense first, pound it inside to the big men and let them control the game on both sides of the court. They had the number one rated defense, 11th best offense and played at the tenth slowest pace in the league. They only had three players, Tim Duncan, David Robinson and Sean Elliott, average double figures in points. Duncan and Robinson combined for five blocks per game and close to 22 rebounds per game. They also went to the free throw line an ungodly 14.5 times per game, which crippled other team’s bigs’ ability to stay on the floor. Basically this team didn’t make a ton if mistakes (bottom half of the league in turnovers) and punishing teams inside. They were nearly unstoppable in the postseason, losing only two games and sweeping both the L.A. Lakers and Portland Trailblazers, who were arguably the next two best teams in the league.

On the other hand, the 2010-2011 team won using offense, offense, offense. They were undersized, had the second best offense in the league and the 11th ranked defense. Instead of two seven footers, the Spurs starting center was either 6’9″ or 6’7″. They were number one in 3-point shooting percentage, eighth in assists and middle of the pack in every defensive category. They were powered by Tony Parker and Manu Giniobili both averaging 17 points per game, as well as three other players in double figures and Gary Neal just missing out at 9.8 ppg. They flamed out in the first round in the playoffs thanks in part to a Ginobili broken arm, Zack Randolph playing outside his mind and Parker wetting the bed against Mike Conley.

So who wins? Well let’s break it down in categories:

Bigs: It’s really not a question of any sorts. Still in his prime David Robinson and entering his prime Tim Duncan are better than any center-power forward duo since Jabbar and Worthy. Not to mention that Will Perdue’s value was probably the equivalent to what 2011 Tiago Splitter’s was. The part I’m ignoring is the Malik Rose-DeJuan Blair match up because when two versions of the same person play each other it creates a rift in the space time continuum. Advantage ’99 Spurs.

Wings: Also going with the ’99 Spurs here. Sean Elliott played an entire season with half a kidney and still 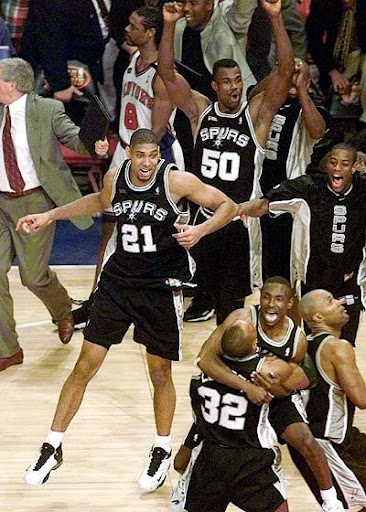 gave the same output as Richard Jefferson did this season. The back up matchup is interesting since the Spurs didn’t have a back up Small Forward. The ’99 team had the tag team of Jaren Jackson and Jerome Kersey. Imagine Jerome Kersey setting picks on Gary Neal. Neal would go flying.

Guards: I’m no Parker fan, but Ill go ahead and say he and Ginobili would take care of business versus Avery Johnson and Mario Elie. Mario Elie is one of my favorite Spurs ever because of the toughness he brought to that ’99 team, but asking him to stay in front of Manu isn’t so much realistic. Ditto for Parker and the “Little General.” As for Antonio Daniels and George Hill… well, aside from having a ring, I’d say Hill has already accomplished more in his career than Daniels and leave it at that.

Bench: Again, goes to the ’11 Spurs. That was one of the main strengths of this team. Depth at four out of five positions with no guy playing more than 32 minutes per game. In 1999, Tim Duncan played 40 minutes per game. Those were the days.

So the ’99 Spurs have the advantage up front and on the wing, the ’10-’11 Spurs get the nod for guard and bench play. Who wins?

I don’t think it’s even close, I think the ’99 Spurs would either sweep or beat the ’10-’11 Spurs in five games. Robinson and Duncan would simply be too much. Even when Parker and Ginobili got into the paint, their shots would be redirected or affected by the “Twin Towers.” Defense trumps offense, end of story.