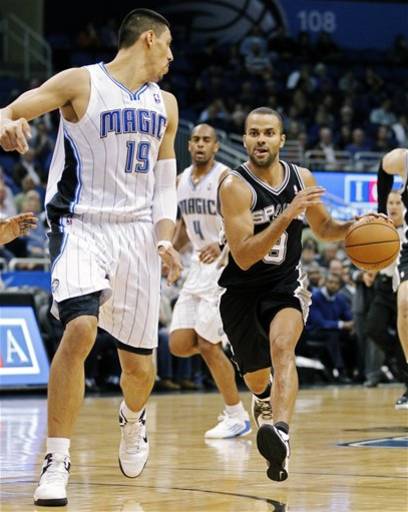 For many years, there was one name the opponents of the San Antonio Spurs had to worry about: Tim Duncan. He used to be the main focus of the opposing defense every possession. Now with Duncan being older, he's not the weapon the rest of the NBA should solely about on the team and Jacque Vaughn knows it. Vaughn praised Parker after the Spurs defeated his Orlando Magic on Wednesday night in an Orlando Sentinel piece and said that slowing Parker down is how you beat the Spurs.

Is he right? Is Tony Parker what Tim Duncan used to be for San Antonio?

Some might say yes. They'll cite how the Oklahoma City Thunder successfully slowed down Parker by putting their shooting guard Thabo Sefolosha and it cost the Spurs four games in a row during the Western Conference Finals. It's exactly the same team with the exception of rookie Nando De Colo joining the team.

I'll agree and disagree with Vaughn on this one.

I do think it's important to slow down Parker because he's one of the top 3 players on the team. I'll disagree with him on slowing down Parker being the only factor. This is the same team as last year core wise, but it has more chemistry than it did last season. The Spurs signed Boris Diaw and Patty Mills while trading for Stephen Jackson during the end of the season. They still won games, but it was mostly on runs where they were hitting shots and playing well.

When the team couldn't score and went into droughts, they didn't know how to respond, who to go to, or who would take over because they didn't know how the newer players would respond in a new offensive system. This year is different. Everyone went through a training camp and everyone is comfortable alongside each other. Last year's acquisitions now know who can do what and if they will do it when it counts.

There's no Big 1 on the Spurs or a “One Player Is Everything” motto in the locker room, there's a Big 3 and for the group “Team Is Everything” is what they believe in. Don't get me wrong, Parker is a huge piece to the Spurs' success but he's not the only piece. Tim Duncan has shown he can still have flashes of his youth on the court and Manu Ginobili has shown he still plays with passion (and still contorting his body to score points). The team has the reliable core with new developing pieces. Boris Diaw is more comfortable on the court with the team while Stephen Jackson is more confident coming off the bench and showing his leadership. Kawhi Leonard and Danny Green have vastly improved on defense while Leonard has picked up his offensive game quite a bit since one year ago.

If you contain Parker, there's more weapons and Parker's helped his teammates with that by developing a three pointer. If Vaughn thinks containing Parker is the only key, he'll be in for a rude awakening when one of the many other weapons step up against his team in the next meeting.