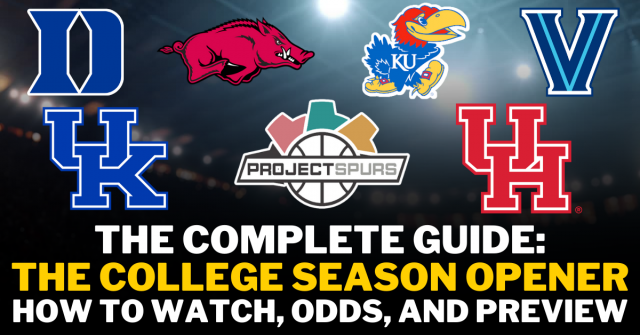 College basketball is finally here, and we have a massive total of 126 games scheduled to kick off tonight in the season opener. With Monday night football tonight, and the NBA not scheduling any games tomorrow due to the midterm elections, we have a packed night of sports. Here are all of the key matchups that you need to know about for college basketball tonight.

The full list of teams in this article is as follows followed by their start time.

How To Watch, Betting Odds, and Previews Below For Each Team

The No. 4 Kentucky Wildcats welcome Howard to Rupp Arena to open their season. Coach Calipari once again brought in a top-5 recruiting class that includes two 5-star players, a 4-star big man, and a three-star combo guard. The expectations are high as usual and include a trip to the Final Four after some disappointing March runs ended prematurely.

Kentucky has likely top-10 pick and guard Cason Wallace in tow, which should give them a legitimate scorer and shooter in the backcourt to complement Sahvir Wheeler, who is very much a set-up man. Chris Livingston is the other 5-star player and has been slotted as a first-round pick by most outlets. They also brought in sharpshooter Antonio Reeves from Illinois State to help space the floor.

Most importantly, Kentucky brings back Oscar Tshiebwe who was the National Player of the Year last season. He is likely out for this game though as Coach Cal said he would be “stunned” if Tshiebwe played. He underwent a knee procedure earlier in October and is still recovering. But having CJ Fredrick back as a shooter should go a long way as well as having Lance Ware and his big-man experience.

This team should have solid chemistry even with the freshmen and lone transfer coming on to the team. This team should shoot it better than in previous years and that should create space for Tshiebwe and other big men to operate.

The Villanova Wildcats have been coached by Jay Wright since 2001. Until now, that is. Wright abruptly retired after his team’s run to the Final Four last season. The university moved quickly in hiring former assistant Kyle Neptune away from Fordham. And he was able to nab a top-25 recruiting class to boot.

The Wildcats have a potential lottery pick in wing Cam Whitmore, but he’s not the lone stud in the 2022 recruiting class. The Wildcats were also able to nab 4-star guards in Mark Armstrong and Brendan Hausen. They may not get a ton of time this year with Chris Arcidiacono, Justin Moore, and Caleb Daniels all returning in the backcourt. But there is a chance they could be pressed into service early.

Villanova will still be a relatively small team with the tallest player standing at 6-foot-9. This allowed them to be fairly switchable last year, but they could run into trouble with some exceptionally tall teams. That’s not likely to happen until March though, assuming they make it back.

With all of the upperclassmen coming back to Villanova, the Wildcats will certainly be one of the most experienced teams in the Big East, if not the country. Eric Dixon and Brandon Slater coming back will also be big with their experience. But with Moore still recovering from an Achilles injury he suffered in March, someone will have to step up in his stead.

The No. 7 Duke Blue Devils are bereft of Coach K, but they still ended up with the top recruiting class for 2022. They reeled in an absurd seven commits including a few potential first-round draft picks. That includes Dereck Lively II, Dariq Whitehead, Kyle Filipowski, and Mark Mitchell. All of those guys were 5-star recruits and Duke landed a 4-star guy in Tyrese Proctor who reclassified to get to school (and the draft) earlier.

The Jacksonville Dolphins are not exactly world-beaters, but Duke is entering an unprecedented era. A new coach with major roster turnover is facing an uphill battle, especially when he returns only two backcourt players who got consistent minutes in Jeremy Roach and Jaylen Blakes. The talent everywhere else — despite the inexperience — should be more than enough to get Scheyer’s tenure started off with a win.

In addition to the freshmen walking onto campus, Scheyer also brings in three transfers. Shooting guard Jacob Grandison comes from Illinois, Forward Ryan Young comes from Northwestern, and undersized forward Kale Catchings comes from Harvard. This first game against Jacksonville will act as a tune-up, but also as a measuring stick for what Duke might need to accomplish as a team to make a run in the conference and March.

The No. 3 Houston Cougars look to get back to the Elite Eight and advance to the Final Four this season. They bring back guard Marcus Sasser, forward Reggie Chaney, guard Tramon Mark, and All-Academic forward J’wan Roberts. The Cougars also brought in five-star forward Jarace Walker and four-star guard Terrance Arcenaux — who may turn out to be a bit of a sleeper draft pick.

The Cougars are looking like they’re going to be the class of the American Athletic Conference this season. They have a good mix of talented guys returning from a team that went to the Elite Eight and have talented freshmen coming in too. They were also able to land guard Mylik Wilson who started at Louisiana and then ended up at Texas Tech last year.

Houston may not be a particularly big team with their tallest player standing at 6-foot-9, but they should be highly switchable, much like Villanova. I don’t foresee Northern Colorado giving these Cougars a huge test, but it should be a good warm-up game — as most of these are at this point in the year.

The No. 10 Arkansas Razorbacks get their season started against North Dakota State. The Bison are coming off a 23-10 season last year and should not be overlooked. The Razorbacks have a ton of new players to break into the lineup, including three 5-star freshmen in Anthony Black, Nick Smith, and Jordan Walsh.

The Razorbacks have three potential first-round picks in their 5-star players. They also brought in three more 4-star freshmen to go along with several transfers. They bring in the Mitchell twins who started at Maryland and ended up at Rhode Island last year, Jalen Graham from Arizona State, Ricky Council IV from Wichita State, and Trevon Brazile from Missouri.

This should be quite a winnable game for the Razorbacks, but it will also give coach Eric Musselman a chance to tinker with his lineups and roster. Almost no one on his roster has played together before so the chemistry is going to be a concern as the season starts. The 5-star recruits will surely see the floor quite a bit so the challenge will be who joins them in the starting lineup.

The No. 5 Kansas Jayhawks enter the season as the defending champs after coach Bill Self led the team to its second national championship under his watch. With a few key players headed off to the NBA in Christian Braun and Ochai Agbaji, Kansas has reloaded with the No. 4 ranked recruiting class. They bring in potential first-round draft pick and 5-star forward Gradey Dick along with three 4-star recruits in Ernest Udeh Jr., MJ Rice, and Zuby Ejiofor.

The Kansas Jayhawks will have some key returning players in Dajuan Harris, Jalen Wilson, Joseph Yesufu, Bobby Pettiford Jr., and Zach Clemence. They also bring in Texas Tech transfer Kevin McCullar who should give them some help on defense and overall.

You can expect Dick to start for the Jayhawks while Udeh and Clemence will likely be jockeying for the center minutes on this roster. Although, Self may go back to his old ways and go with traditional two-big lineups. This first game will give him an opportunity to experiment and for fans and watchers to get an idea of how the offense will look this year.

What is your favorite college basketball game tonight? 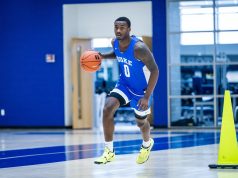