PHILADELPHIA – The weather in the Northeast of the United States is bitterly cold, but the 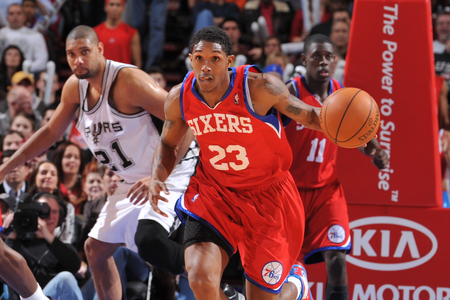 shooting from the San Antonio Spurs tonight was even colder and the main reason they fell to 44-9 for the season losing to the Philadelphia 76ers (25-28) tonight in Philadelphia 77 to 71 on the Rodeo Road Trip.

“Both teams sort of set offensive basketball back a decade or so tonight for whatever reason. But both teams kept motoring, kept trying to get after it,” Spurs’ coach Gregg Popovich said. “Neither team could make a damn shot down the stretch. We had a couple of turnovers, they had a couple of offensive boards, made a shot or two, end of story.”

Philadelphia held the Spurs to a season-low 71 points, their lowest total since scoring 64 at Utah in 2008.

“Yeah it doesn’t happen quite that often,” Popovich commented on the offensive drought from both teams in the third and fourth quarters.

For the game the Spurs shot a season-low 33.3% from the floor while Spurs guards Manu Ginobili and Tony Parker shot 5-of-20 and scored 17 points combined.

The poor shooting not only was seen with the Spurs’ two starting guards, but it was every starter who could not find their shooting stroke. Richard Jefferson went 1-of-8, Tim Duncan went 7-of-18, DeJuan Blair went 3-of-11 and Ginobili also went 0-of-5 from the three-point line.

But despite their shooting woes, the Spurs transition defense was practically non-existent as the 76ers finished the game with 21 fast break points to the Spurs’ five.

The Sixers, as mentioned, also had their share of frigid shooting. Andre Iguodala went 2-of-15 from the floor and scored seven points.

“Forget the offense. Our whole game plan was around three things. First and foremost, keep those guards out of the paint. That was the number one key,” said Sixers coach Doug Collins.

The Spurs were led by Duncan, who finished with 16 points, 13 rebounds and two blocked shots. Gary Neal and Antonio McDyess scored 11 points apiece off the bench.

Richard Jefferson weighed in on the shooting struggles from both teams.

“I wouldn’t necessarily say it was cold. Oh, no. It was cold. Both teams were cold.”

Perhaps Popovich said it best when he said, “Want me to say it again? Neither team shot well.”