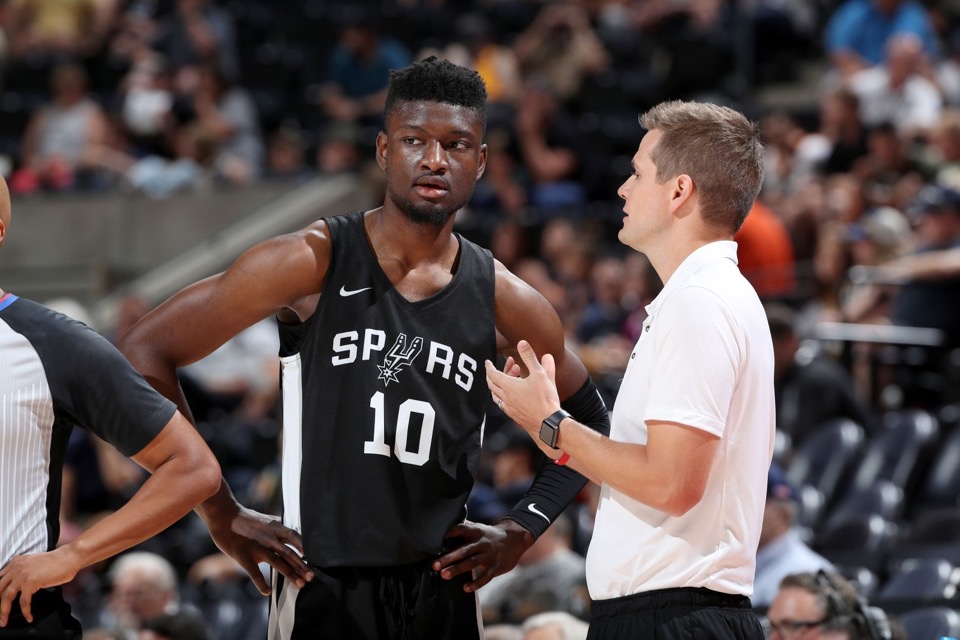 Before the NBA season came to a halt, the San Antonio Spurs were in big trouble both literally and figuratively. While the league’s hiatus will give LaMarcus Aldridge more time to rest and Jakob to heal, whether they play or not may be up in the air. Should Chimezie Metu get the call if play resumes any time soon?

With Luka Samanic, Keldon Johnson, Quinndary Weatherspoon, and Drew Eubanks all getting minutes on the injury-depleted San Antonio roster, Chimezie Metu has been nothing short of electric in the G-League. Putting together quite the highlight reel the last couple of weeks, both offensively and defensively, Metu is getting noticed. He even made it to Sports Center’s SC Top 10 feature, appropriately at number seven (also his jersey number).

This is the Spurs though, where “we” means more than “me”, so personal accolades aside, Chimezie’s production is starting to translate into team success. Before Wednesday’s loss in a rather hands-off game against the South Bay Lakers (just look at the 148-138 score), Austin was rolling strong with Metu leading the charge. Since returning to the Austin Spurs on February 25th, the 6’9” Forward /Center was averaging 21.5 points, 11.8 rebounds, 1.8 blocks and easily 3 highlights in 35 minutes per game. The team was 3-3 over that stretch, but 3-1 in the last four games where Metu’s averages have picked up thanks to some truly dominant performances, including four consecutive 20+ point double-doubles, giving him nine on the season. Austin currently has a 24-18 record, good for third in the Western Conference’s tight playoff race where the difference between the #2 seed in the West and missing the postseason is just 5 games.

Like any other player in the G-League, Chimezie takes the court in hopes of keeping his NBA dream alive. A second-round pick out of USC in the 2018 NBA Draft, Metu is a member of the San Antonio Spurs roster on G-League assignment (as opposed to a Two-Way or G-League contract), entering the final year of his deal, which is non-guaranteed for the 2020 – 2021 season if he is waived before August 2nd. After that he’ll be guaranteed $500k, and the contract becomes fully guaranteed after October 15th.

With his recent performances, both in stats and effort, Chimezie’s making a case for that contract, and a shot at returning to the parent club. Injuries to LaMarcus Aldridge and Jakob Poeltl have created a glaring weakness in the post, and back-to-back losses for San Antonio have exploited that. Given the need, many Spurs fans have wondered why Coach Pop hasn’t made the call for Metu yet. For me, I think it comes down to three potential factors: Drew Eubanks, Metu’s size and Austin’s playoff picture.

Chimezie Metu is under contract through next season. Though non-guaranteed, the fact that he is signed makes his situation a lot more pressing than that of Drew Eubanks. As I wrote in an article last month, the time is running out on Drew’s opportunity to earn a fit with the Spurs moving forward, and Coach Popovich seems to be giving him every chance to do just that. In turn, Eubanks (another 6’9” PF/C) is making the most of it, even earning a starting role. Once a decision has been made on Drew, Chimezie may be called back to San Antonio if and when the season resumes.

It just so happens that San Antonio’s two tallest players on the roster have been dealing with injuries, forcing the coaches to settle for 6’9” guys at center, and Chimezie is left holding the short end of that straw. Given the Eubanks situation (above), the advantage of experience for Trey Lyles and Rudy Gay, and that Luka is getting classroom time; the team just doesn’t have space for Chimezie. As is the case for some in the G-League, it is better to have a chance to play every night than to sit at the end of the bench and not play.

When you have nothing to play for, it can be a little bit difficult to go out and compete every night. That’s the case for the San Antonio Spurs, as they are looking to miss the playoffs for the first time in Chimezie’s lifetime (he’s 22 by the way). Right now it is key for the rookies and Drew to get experience at the next level, so in the meantime, I believe it is Metu’s role to keep the Austin Spurs in contention. As stated above, the margins for error are slim, but the team controls their own destiny. To this point, Chimezie has played more than half of the season with Austin, calming any concerns about postseason eligibility. Preserving the opportunity for the rookies to have something to come back down and contend for could give the players and the Spurs organization an air of positivity after a painful NBA season. Of course, this all hangs in the balance with the rest of the league’s season.

The last point there is the one that I truly feel is the most important reason why now is not the time to call up Chimezie if play resumes. After failing to defend their 2018 title, the Austin Spurs have the talent to make a run for it, and the players deserve the chance. Metu would be essential to such a run, and there is no real gain for San Antonio to call him up.

What do you think – Are NBA minutes for Chimezie more important for the franchise than a G-League title? If the season resumes, should one of the other guys be sent back down to clear room for him? Leave a comment below, or let me know on Twitter @jarkclonas or through @ProjectSpurs