Editor’s Note: Please welcome to the Toros Nation writing staff Travis Atkins. Travis comes from the Austin American Statesman and will be bringing a brand new look and fresh content here at Toros Nation. Enjoy his debut post on the home of the Austin Toros, the Cedar Park Center.

The Austin Toros like their new home, even though it’s not in Austin. The move

from the Austin Convention Center to the Cedar Park Center this year has been, by all accounts, a successful one. Now in their sixth season of existence, the Toros have seen their attendance increase as the brand new arena allows for a better fan experience.

“The transition to the Cedar Park Center has been fantastic,” Toros Chief Executive Officer Peter Lubell said. “We have seen a huge spike in attendance at every one of our games thus far. All the feedback that we have received from our fans has been, with this being an arena, it feels like a real, professional basketball game.”

In their first 11 home games this season, the Toros averaged 2,854 fans, up from about 2,000 last season. The Toros are 14-20 on the season, so the increase seems to be related more to the facility than the team’s success.

Marc Hoenig of ESPN Austin has been calling Toros games for the last five years. “I think there was always a stigma about the Convention Center as an arena,” Hoenig said. “There was an unfair prejudice against parking down there also. Cedar Park is more of a basketball arena. It seems like everybody really likes going to games.”

Parking is not a concern; however, the center does charge ten dollars, more than the average price of a ticket.

“We’ve gotten some complaints here and there about parking,” Lubell said. “But after a while, people get used to it because they enjoy the product that we have. The parking is part of the building deal, so there’s not much we can do about it.”

The jumbo screen in the center of the court let’s fans watch replays and allows for interactive crowd promotions, which they couldn’t do at the Convention Center. Also, the team has some control of concession prices, and can run promotions like “Thirsty Thursdays” or dollar hot dogs.

Carldell “Squeaky” Johnson is the longest tenured Toro. He played three years at the Convention Center prior to this season. 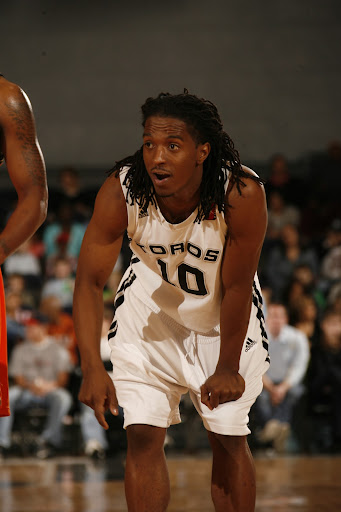 The move has allowed the Toros to tap into the growing Williamson County market, which the Texas Stars and Round Rock Express have had success with.

“All of our fans in Travis County still come up to watch the Toros,” Lubell said. “Now, we are expanding our fan base to everyone up in Williamson County as well. With any move, there is going to be growing pains, but those have been minimal so far.”

The Stars out-draw the Toros, averaging 5,157 fans at their home games this season and the Express, who play about ten miles from the CPC, routinely draw 8-9 thousand per game. The center holds 6,800 and at times it can appear a little bare for the Toros, with little or no fans behind the rims.

Lubell likes the approximately 50 percent increase in attendance from last year though and is encouraged with the loyalty the fans show.

“We’ve found that fans in the suburbs are more likely to get behind a team and stick with them,” Lubell said. “That’s why we see more return visitors to our games here in Cedar Park than we did downtown.”

Eric Cuellar is a season-ticket holder and was recently courtside for the Toros overtime victory against New Mexico.

“I never went to see them when they were playing downtown,” Cuellar said. “I think it was the advertising, I never heard it. Now the Cedar Park Center is new and fresh, and now we are starting to hear about it a lot more.”

The partnership with the center was in the works from the time the facility was built in 2009. Lubell, as well as the Spurs, had an existing relationship Rick McLaughlin, General Manager of the CPC, and the two came to terms for the move before the 2010 season after playing two test games there last season.

McLaughlin is also the president of the Texas Stars and the arena was built for the hockey team. Therefore, the Toros have to schedule their games around the Stars, who get first priority. On weekend games when both are scheduled, the Toros play early in the day, usually noon, and the Stars get the evening slot.

“Very few of the D-League teams have ownership in the building they play in,” Hoenig said. “So, a lot of them are at the mercy of the building owners and it’s just constantly a struggle to get the premium nights.”

Lubell dealt with scheduling conflicts when his team had to share the Convention Center the previous five years. He feels the facility upgrade is worth playing second-fiddle to the Stars. Lubell said the Toros would be there for at least three years.