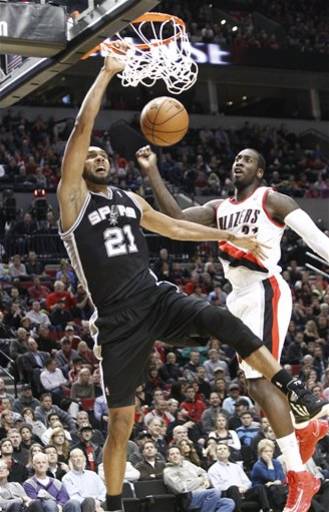 At this point in his career, you'd think Tim Duncan would be a shell of his former self from when he first came into the league.

At 36 years old, Duncan is defying the odds (and Father Time) by averaging 17.5ppg and 10.4rpg on 49% shooting. San Antonio Spurs fans have taken notice to Tim's youth on the court and so have his opponent's.

Dallas Maverick's coach Rick Carlisle talked about Duncan's game at this point of his career via Star-Telegram.com:

"He's a good example on how you can’t ever underestimate greatness at any age,….obviously he takes tremendous care of himself and loves and respects the game."

TD has proven that you can defy aging if you take care of your body and play a smarter game.

These things can't be said of other great bigs past their prime. They decided to whither away at the end of their careers while still trying to play the way that made them great or dominant.

Duncan has transformed his game and his lifestyle to benefit his health and his team, not his ego. His youthful legs on both sides of the floor prove that and his 30.7mpg show that the only thing that will slow Duncan down is himself.

If he keeps in the same path he's on, that will have Spurs fans thinking championship this year. If the Spurs do win another title, fans have to thank Duncan for doing what other players usually don't do – looking to finish his career looking and playing like he did when he first put on a San Antonio Spurs jersey.