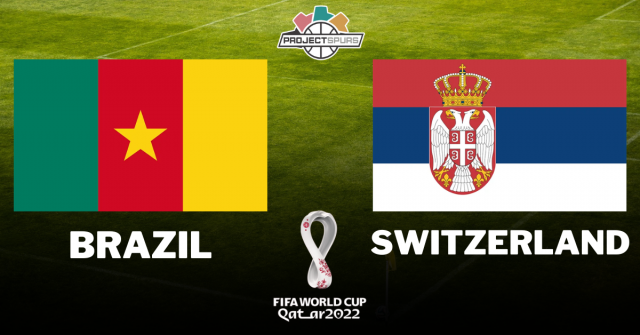 After a massive 2-0 win in a tough match against Serbia, World Cup favorites Brazil will look to qualify for the knockout stage against Switzerland. The Swiss are also coming off a big victory, edging Cameroon 1-0 through a Breel Embolo goal. Brazil is considered the heavy favorite for this match, which is warranted considering the squad and talent they have at their disposal.

They will be without their most vital and coveted superstar in Neymar Jr. who has been ruled out until at least the remainder of the group stage. This is a big blow for the Seleção Canarinho, but there is a general belief that they still have enough attacking talent to produce. The Swiss will be no easy pushover, as they are a team known for giving the bigger sides trouble.

In fact, in EURO 2020, they knocked out France in the round of sixteen and almost beat Spain in the quarterfinals. This will not be an easy game for Brazil, as these two sides were in the same group in the last world cup and drew 1-1. If the boys in the famous yellow shirts can get three points, they will be already qualified for the last 16 and will have a great chance of topping the group.

After the 2-0 win on Matchday one against Serbia, questions were only really concerned with the condition of Neymar’s ankle, which looked very swollen after a rough challenge during the match. Even though losing the main star is going to be tough, Brazil are so rich in talent that it can be quite remarkable looking at their roster. Tottenham Hotspur striker Richarlison had a brace, including a scissor kick, to lead Brazil to victory, and seems to be a key cog in the Brazilian machine.

A solid midfield that is led by their Rolls-Royce midfielder in Casemiro will look to control the game from the kickoff. With the two center backs in Marquinhos and Thiago Silva, the experience of this Brazil squad mixed with young, express talents, it will be very difficult for anyone to beat the Selecao. The power of Jogo Bonito may be too much for the world to handle, and we could see Brazil go three-for-three in the group stage.

As much as everyone talks about Brazil, we cannot forget about the Swiss. This is a team that does boast some quality, experienced players. Two of the names that have been standouts for almost a decade are Xherdan Shaqiri and Granit Xhaka.

The two have always come up big for the white cross and will hope to cause another shock upset in this world cup. A.S. Monaco striker Breel Embolo scored in the last match against Cameroon and will look to get one against a mighty Brazilian defense.

Manchester City center-back Manuel Akanji will hope to protect goalkeeper Yan Sommer, who has had some really good performances in a Swiss shirt. Don’t sleep on this squad, as they could sneak out a draw or potentially something bigger.