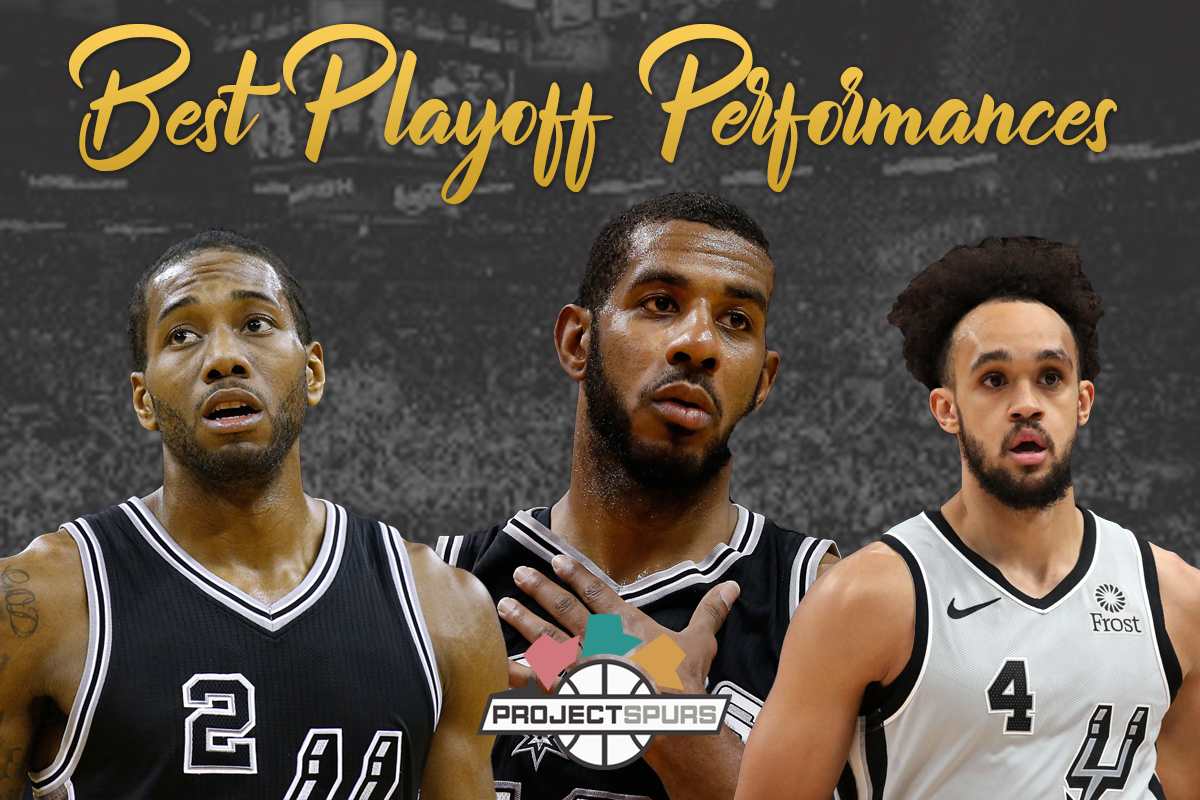 After their most recent NBA title in 2014, the San Antonio Spurs haven’t had the postseason success they grew accustomed to for over 20 years.

This final installment of the series is the first one that doesn’t include an NBA championship or even an NBA Finals appearance. Considering three Spurs legends and another surefire Hall of Famer departed the team throughout this span; however, that doesn’t come as a surprise.

The years 2015-19 would see the retirement of The Big Three, the rise and exit of Kawhi Leonard, and the emergence of a new era in San Antonio.

Here are the best individual playoff performances by the Spurs over the last four years.

Considering the embarrassment of riches that was the Spurs lineup in 2015-16, their postseason was a letdown. Boasting a lineup that included LaMarcus Aldridge, Kawhi Leonard, Tony Parker, Tim Duncan, and Manu Ginobili, San Antonio earned the two seed with a gaudy 67-15 record going into the playoffs.

After sweeping the Memphis Grizzlies in the first round, the Spurs were looking to take a 2-0 lead on the Oklahoma City Thunder. The game came down to the final buzzer, but in the end, Kevin Durant and Russell Westbrook were too much for the Silver and Black, winning 98-97.

In the narrow loss, Lamarcus Aldridge did everything he could to keep the Spurs in it. Aldridge shot a blistering 15-for-21 from the field to score 41 points and nab eight rebounds in the game.

San Antonio ended up losing in six to the Oklahoma City Thunder.

When Tim Duncan retired following the 2016 playoffs, many considered that the nail in the coffin for the San Antonio Spurs. Losing a Hall of Famer surely is enough to slow them down, isn’t it?

Well, little did anyone know that Kawhi Leonard would emerge into the superstar that he’s become today, which would start in the 2016-17 season. Kawhi averaged 25.5 points and 5.8 rebounds that year, helping the Spurs to a 61-21 record without Duncan.

The first round of the playoffs against Memphis is where Leonard had his breakout playoff series, averaging an impressive 31.2 points, 6.0 rebounds, and 2.0 steals per game in the series.

Game 4 of the series was Leonard’s biggest effort, as he nailed seven of his 10 shots from the outside to put in 43 points and pull down eight boards. The Spurs went on to lose the game by two but pulled the series out in six games.

The 2018 season is when the bloom began to fall off the rose for the San Antonio Spurs. Sure, they still made the playoffs, but this year marked when the team would have to start fighting for bottom-tier playoff spots as opposed to one of the top.

Entering the postseason as a seventh seed, the Spurs ran into Kevin Durant, Klay Thompson, and the juggernaut Warriors in the first round. Severely outmatched, San Antonio only managed one win in the series, taking Game 4.

Game 2, however, is when LaMarcus Aldridge had his best performance, going 11-for-21 and a perfect 12-for-12 from the free-throw line to put up 34 points. The performance led to Coach Popovich calling him a “monster” postgame:

“LaMarcus has been a monster all year long.”

Gregg Popovich after LaMarcus Aldridge scored 34 points in the @spurs loss to the @warriors. pic.twitter.com/RB6ThB7gJi

The Spurs lost the game 116-101, showing they just didn’t have enough firepower to keep up with Golden State.

The Spurs once again entered the playoffs as the seventh seed in 2018-19, led in the regular season by the duo of DeMar DeRozan and LaMarcus Aldridge.

Despite falling in seven games to the heavily favored Denver Nuggets, the biggest thing that came out of the series was Derrick White’s arrival as a critical piece.

This Derrick White dunk is insane 🤯

White averaged 15.1 points on 54.7 percent shooting from the field in the series, highlighted by his breakout Game 3. He got to the basket at will throughout the game, missing just six of his 21 attempts to finish with 36 points, five assists, and five rebounds.

Derrick was also arguably the team’s best player in the recent seeding games from Orlando.

Now that San Antonio’s streak of playoff appearances finally came to an end, the hope is that the youth movement under Gregg Popovich’s guidance can start another one in 2021.