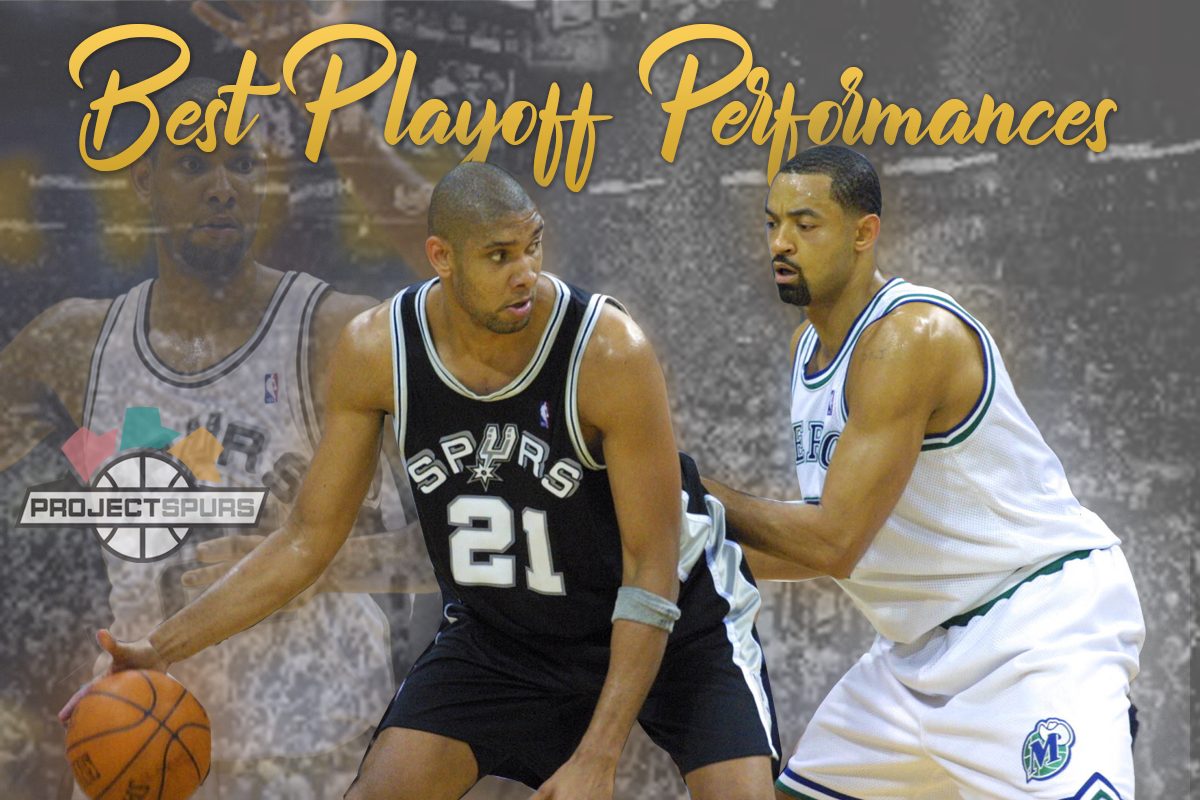 When the San Antonio Spurs walked onto the court for their final game on the Orlando campus, their fate of missing the playoffs for the first time in over two decades was already sealed. It was a wildly unfamiliar feeling to know that what’s been a staple for the franchise was finally coming to an end.

Still, the Spurs showed remarkable resilience by even keeping their playoff hopes alive for so long, considering the deep hole they’d put themselves in leading to the NBA’s shutdown.

San Antonio’s tendency to always be in the mix has allowed them to be postseason participants dating back to the 1997-98 season, which was Coach Gregg Popovich’s first as head coach.

While Popovich has been the mastermind behind the team’s success, the Spurs wouldn’t have become the dynasty they’ve been without strong playoff performances from the players themselves.

To commemorate the end of the extraordinary streak, I’ll be honoring the best individual playoff performance from each season from the start of the run. First up, the 1997-98 playoffs.

Okay, so the truth is Tim Duncan had more than one 30+ point, 10+ rebound games in his first postseason throughout his nine games played. But let’s be real, Duncan is going to show up plenty of times in this list.

The game that Avery Johnson had to close out the Phoenix Suns in the first round is worth recognizing, considering it was his career-high in points scored for a playoff game.

The Little General was on fire all game long, going 11-of-15 from the field and even getting to the line 12 times, knocking down eight.

As a result, Johnson helped the Spurs oust Jason Kidd, Steve Nash, and the Phoenix Suns out of the first round in four games.

I told you Tim would be on this list plenty. Duncan had a spectacular postseason to lead the Spurs to their first NBA title in his sophomore season.

No stretch was better for Duncan than Games 3 and 4 of the Western Conference Semifinals against Kobe Bryant, Shaquille O’Neal, and the Los Angeles Lakers.

Tim was unstoppable at The Forum, shooting 9-for-19 from the field and 19-for-23 from the free throw line to post a stat-line of 37 points, 14 rebounds, four assists, three steals, and a block.

In the series-clinching Game 4, Tim added another 33 points and 14 rebounds for good measure as the Spurs swept L.A. out of the playoffs.

The year 2000 was a year to forget for the San Antonio Spurs. While they finished with a stellar record of 53-29 and were first in the NBA in points allowed per game, that all didn’t matter when Tim Duncan got injured.

With just four games remaining until the Spurs looked to defend their first title in the postseason, Tim Duncan tore the lateral meniscus in his left knee. This made him unavailable for the rest of the season, causing a short, 3-1 series loss to the Phoenix Suns.

In that series, David Robinson had a shining moment on the road in Game 3, making 12-of-27 shots and 13-of-18 from the charity stripe to finish the night with 37 points. The Admiral also added 13 rebounds and four blocks in a losing effort.

What a difference it makes having an all-time great back on the court. Tim Duncan had multiple playoff games to choose from in 2001, but his performance to close the door on the Mavericks has to be his best.

Going head-to-head with another all-time great in Dirk Nowitzki, Duncan had a dominant series from start to finish against Dallas, capped off by a 32-point, 20-rebound game to help the Spurs win the series 4-1.

Tim also blocked five shots in the clinching game while the Mavericks blocked three as a team. His performance in the 2000 playoffs was just a sign of what was to come in the near future in the form of two MVP seasons.

Coming up in the series, a look at the years 2001-2005, which is bound to have dozens of championship-level performances.