Week 11 of the best college basketball games ended up being a couple listed and definitely some that weren’t last week. UConn suffered yet another debilitating loss while Kansas was struck down by in-state rival Kansas State in a close game. And Gonzaga might have been stunned the most by LMU, who ended the Bulldogs’ 76-game home winning streak. Now we get to see who might have the best games of week 12.

The Jayhawks recently suffered its first loss in conference play to Kansas State but are still atop the Big 12 standings. Baylor has not been as fortunate so the Bears are definitely looking for some nice home cooking to try to get out of the middle of the Big 12 pack.

Look for Keyonte George from Baylor to be the leading scorer as he has so many times for them already this season. He will likely face resistance from Jalen Wilson or Kevin McCullar in this one. Look for Jayhawk forward Gradey Dick to rebound from his 1-of-8 shooting from beyond the arc against Kansas State as he is too good a shooter to let that happen again.

Both of these teams are vying for the top spot in the Big 12 standings and a win for either of them would go a long way in separating themselves from the pack. Kansas State has been a scoring machine behind the hyper-efficient Keyontae Johnson and steady hand of guard Markquis Nowell. In fact, the Wildcats are a top-10 team in assists per game.

Iowa State will try to make this game more of a rock fight. The Cyclones only allow 58.5 points per game and are excellent at limiting teams to poor shooting all over the floor. Teams shoot under 30% from beyond the arc and only about 40% from inside it. In fact, they’ve allowed the fewest made and attempted 2-point shots in all of college basketball.

UConn continues to make this list of teams to watch purely because they are on a brutal losing streak and we have to see if they can recover from it. After being one of the last undefeated teams remaining in the country, the Huskies have now lost five of their last six games (the Butler game notwithstanding). They have to get back to their winning ways and what made them so good to start the year.

Xavier is currently sitting atop the Big East and will look to stay there should it beat UConn in this one. The game will likely come down to which team can get their star player going first. The Musketeers need Souley Boum firing on all cylinders and the Huskies need to be feeding Adama Sanogo early in this game to establish some paint presence.

The last time these two teams met was in Houston and gave us one of the most entertaining games of the AAC schedule. It was a six-point win for the Cougars, but with this game being in Orlando, there’s a chance the fortunes are reversed. UCF’s Taylor Hendricks continues to prove he’s NBA Draft worthy while Houston’s Jarace Walker continues to show why he’s a lock in the lottery.

The question for UCF will be whether or not they can contain Houston guard Marcus Sasser in this contest. If the Knights can do that, that should make Houston play an uglier game than it’s used to throwing out on the court. Hendricks will get some support from his senior backcourt in C.J. Kelly, Ithiel Horton, and Brandon Suggs. All of whom have been key contributors for this team.

This excellent mid-season showdown is brought to us via the Big 12/SEC Challenge. It should also bring out the most orange of people and a nice clash of playing styles. Texas loves to get up and down the court to play fast and score in bunches. Meanwhile, Tennessee would rather slow this game down and have it played in the 60s if possible.

Tennessee is fairly well-balanced in its scoring with Santiago Vescovi leading the team at almost 13 points per game. Texas is led by Marcus Carr at 17 points per game, but there are three more guys averaging over 10 points per game and another four who average six or more points per game. It’s safe to say that the Longhorns could get a good scoring day from a number of guys but look for Texas to use its athleticism on defense to limit good looks for the Vols.

This is another epic mid-season showdown coming to us from the Big 12/SEC Challenge. Two blue types of blood breaking up their conference schedules for this kind of game will be nothing but fun. Kentucky is resurging a bit after struggling to get their SEC slate started. Kansas has been rolling pretty much all year and now they meet.

Oscar Tshiebwe will be Kentucky’s best player in this game and Kansas will likely throw KJ Adams on the big man to defend. If Adams can contain Tshiebwe at all and limit him on the boards, then Kansas can count on a win in this game. Limiting Kentucky’s offense in the half-court and making them use up the shot clock will go a long way as well as they don’t have a go-to scorer right now.

Be sure to catch us next week for the best college basketball games of week 13. 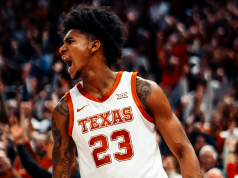