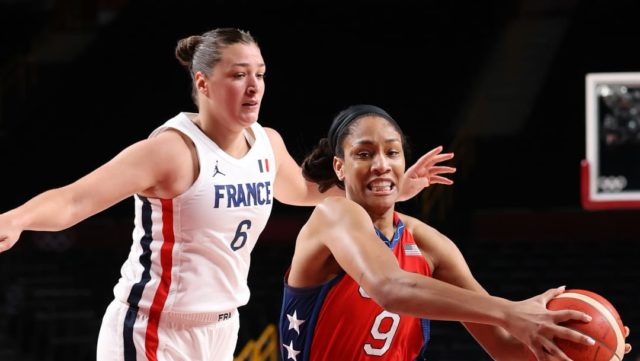 The U.S. women’s basketball team closed out Olympic play with a 93-82 victory over France, pushing their Olympic winning streak to 52 games.

Team USA started the game off slow, trailing 22-19 at the end of the first quarter. The Americans responded with a big second period and took a 50-44 lead into the locker room.

A’ja Wilson continued her dominance in these Olympic Games by pouring in 22 points and seven rebounds. Breanna Stewart added 17 points, seven rebounds, and seven assists in the win for the Americans.

France took advantage of six turnovers by the USA in the third quarter, going on a run and outscoring the USA 23-21 in the period. The fourth quarter saw both teams go back and forth but the Americans closed the game on a 22-10 run to pull away and enter the knockout rounds undefeated.

I thought we ran up against a tough France team that was playing to survive and advance in the Olympic Games, and they played with extra effort,” Team USA Head Coach Dawn Staley said. “They hit some incredible shots, and they put us back on our heels. And I thought we made some adjustments, and I thought we did what we needed to do to win a basketball game.”

Tina Charles had one of her best games in the Olympics, scoring 15 points and dishing out five assists off the bench.

I strive myself on getting better each and every single year,” Charles said. “The older I get, younger players are coming in, and we have great players in our league great players abroad. And in order to separate myself or keep myself within the same company that I’m in, I have to just keep working on my game, and extending my range was my top priority.”

Team USA will now have to wait for the draw that will be held to determine who they face in the quarterfinals. However, regardless of the opponent, it is clear that Monday’s game was just what was needed for this American squad.