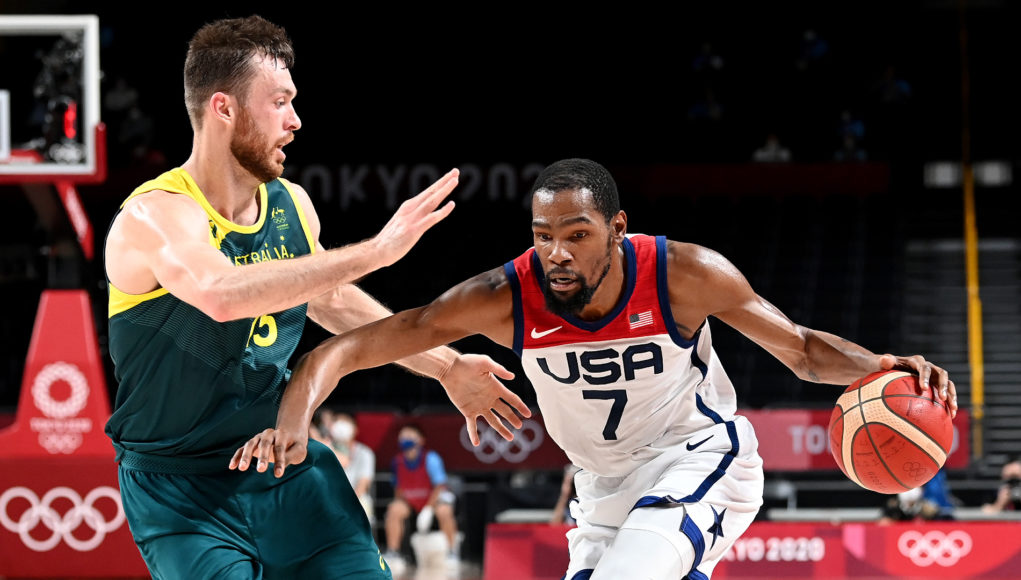 With Team USA trailing by 15 points in the first half, US Head Coach Gregg Popovich turned to the men with championship experience in Kevin Durant and Jrue Holiday. The end result? A trip to the gold medal game.

Durant scored 23 points as he put the Americans on his back, lifting Team USA to a 97-78 victory over Australia to advance for a chance to win gold on Friday morning in Tokyo. Holiday added 11 points but his main contributions came on the defensive end, holding Aussie guard Patty Mills to 1-of-8 shooting in the first half.

Devin Booker helped out Durant on the offensive end, finishing with 20 points. He hit the first three-pointer of the game for the Americans, who were 0-10 before his corner three just before halftime.

After going down 15 points in the second quarter, the Americans closed the half on a 14-4 run and used a 32-10 third quarter to take control of the game with a sizzling offense and hard-nosed defense.

“When you are a great team and you’re playing a team who feels that it’s going to be tough to beat us, they’re going to come out and play their best brand of basketball,” Durant said. “They’re going to play perfect basketball, and I felt like that’s what they did in that first half, and once we went down three going into halftime, I felt like we had the game in hand.”

Holiday and Durant led the defensive charge, which got big men Bam Adebayo and Draymond Green involved. Team USA held the Aussies to 3-of-16 shooting in the third quarter.

The Aussies were led by Patty Mills, who had 15 points. For Australia, a win would have been a moment they would never forget, regardless of how they performed in the gold medal game. Mills, who decided to leave the San Antonio Spurs after 10 seasons this week, hugged Popovich after the game.

For Pop, the win was a bittersweet moment.

“I’m thrilled with the victory obviously, but when I looked him in the eyes, I felt badly,” Popovich said. “Because they want it at bad as any of us, that was a little bit sad. But that’s what we all do, we all try to win.”