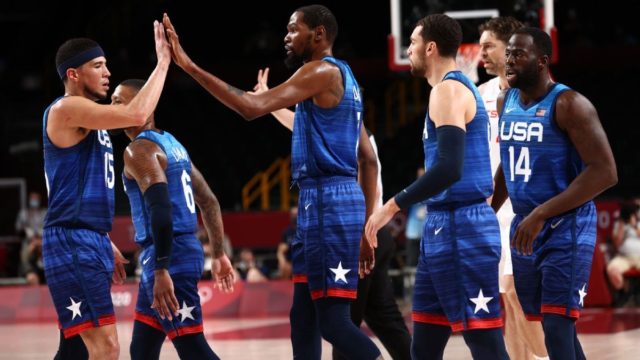 As they say, it’s not how you start it’s how you finish. The U.S. men’s basketball took that to heart in their quarterfinal contest against Spain, getting the 95-81 victory to advance to Tokyo Olympics basketball semifinals.

Team USA overcame a sluggish first half, where they shot 4-of-17 on 3-pointers and played subpar defense en route to a tied game going into the second half. The Americans came out aggressive to start the third quarter as Kevin Durant scored 13 of his 29 points in the quarter, helping the USA build a double-digit lead.

The Americans opened the half on a 15-4 run and when Spain got on a run of their own, Durant and Jayson Tatum converted big buckets to keep Team USA ahead when it mattered most.

Tatum finished with 13 points in the game and Jrue Holiday added 12 for the Americans, who await the winner of the Australia-Argentina game. A win in the semifinal sees them play for gold but a loss sends the Americans to the bronze medal game.

Spain was led by Ricky Rubio’s 38 points on 13-for-20 shooting. Sergio Rodriguez added 16 and Willy Hernangomez scored 10. This is likely the final time this group will play in the Olympics, including Pau Gasol, who played his final basketball game.

Spain had won three consecutive Olympic medals, including silver in 2008 and 2012 after losing to Team USA and a bronze in 2016 after falling to the Americans in the semifinals.