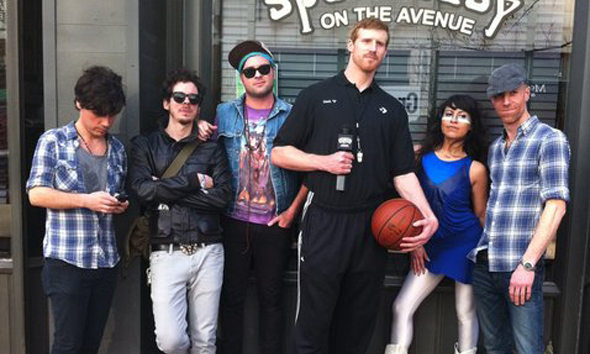 In a recent interview with Evan Kenney of the band the Bodega Girls, the Basketball Jones’ Trey Kirby spoke to Kenney about the band being involved with San Antonio Spurs’ Matt Bonner as they wrote the catchy theme song for his online series, “Fundamentals of the game with Coach B.”

Kenney opens up about how the band came into contact with Bonner, why they were thrilled to write a song for his show, and what they feel about the NBA lockout.

Kenney on how the band met Bonner for the first time.

They’re from New Hampshire, Bonner is from New Hampshire. So basically we were playing and he just loved it! We got off stage and immediately knew it was him, I mean, he is the tallest dude I have ever seen in my life. You can’t really miss him!

Kenney then spoke on the thrill it was to write a song for Bonner’s series.

It’s great! I mean to be involved with anything that he does. I also love his blog.

Kenney finally tells Kirby that the band doesn’t like the lockout either, but they do support the players and Bonner’s decision.

We want Bonner to be happy. I hope it works out. I really do. But I think what he’s doing is the right thing if he believes in it. Those dudes work their asses off and they should be compensated for what they do. I don’t know. We are still waiting to see how it all works out, but I know Matt fully believes in the lockout.

There you have it Spurs fans, the NBA lockout is officially taking it’s toll as we’re writing about Coach B and his theme song. Let’s hope Coach B can get his Canadian citizenship in time for the FIBA Americas later this month so we can mention him in something basketball related.