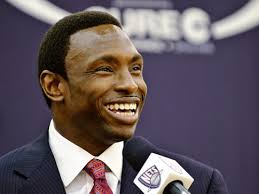 New Jersey Nets coach Avery Johnson spent the majority of his career in San Antonio as a member of the San Antonio Spurs. Nicknamed the “Little General,” he won his first NBA title with the Spurs in 1999 and still remains a fan favorite in San Antonio.

With his number six jersey hanging in the rafters of the AT&T Center, it’s no surprise he’s glad to be back as the Spurs host the Nets.

“It feels good. It feels good to be in a situation where the weather is beautiful,” Johnson said. “I’ve been kind of cold in the New York-New Jersey area. We’ve had a few blizzards so it felt good to go on my walk which I like to do on gamedays and start sweating, so it’s good. It’s good to be back in this building.”

As for the team his Nets are playing tonight, the Spurs, there is no doubt in his mind that they are the best in the NBA.

“Right now they’re the best team in the NBA. A team that plays the right way and it’s also exciting with the trades that we made and the new additions to our team,” said Johnson.

As Johnson mentioned, yesterday the Nets made a surprising trade deadline deal with the Utah Jazz which brought over All-Star point guard Deron Williams and for Johnson, he knows it’s a positive step for the Nets.

“This is a step in the right direction for our team. I would hope that he plays 36 plus. I’m expecting him to play his normal minutes,” said Johnson.

Johnson also talked about his former teammate Tim Duncan and his role being similar to Spurs legend David Robinson.

Johnson said, “Both he and David for a long period of time dominated their positions. Then they both got to a stage where they thought ‘You know I can’t just turn it on like I used to. Still in the top three or five in my position but I’m not the number one guy at my position anymore’ and you need to pass the baton and allow other guys to help you.”

“That’s what Tim has done and he learned it from a great teacher. He’s done it with such dignity and class and I think it’s great on his part to know what stage of his career he’s in and boy, he’s had a hall of fame career and definitely the best power forward to ever play the game,” Johnson said.