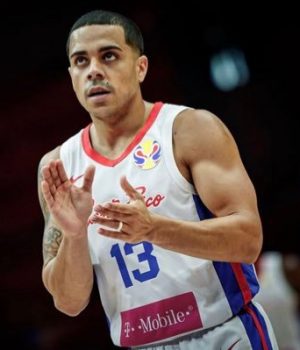 When the Austin Spurs came from behind to beat the South Bay Lakers 128-124 last Thursday, #13 was in the house, but not the one usually on the court.

San Antonio Spurs legend James Silas, who wore 13 with the Chaparrals in Dallas of the ABA and remained with the team as they transitioned to the San Antonio Spurs, was in attendance as part of the Austin affiliate’s celebration of Black History Month. Silas’ number was the first number retired by the Spurs as it went to the rafters in 1984.

Another #13 was missing from the H-E-B Center on Thursday as Austin’s point guard, Angel Rodriguez, was playing in the FIBA AmeriCup 2021 Qualifiers for Puerto Rico against Team USA.

Angel’s energy, production, and consistency was missed in Thursday’s G-League contest that saw Austin and South Bay take turns on scoring runs until the Spurs finally pulled away. Meanwhile in Puerto Rico, Rodriguez came off the bench for 5 points in 15 minutes with the home team falling 70-83 to the US. His performance in the second and final game of this first qualifying window was nearly identical, also resulting in a loss on the road for Puerto Rico.

After a rough 0-2 start to their AmeriCup hopes, all teams will have an opportunity to regroup. Fortunately for Puerto Rico, their next qualifying window isn’t until November, and that’s good for Austin as they should have their starting point guard back ahead of Tuesday night’s game in Sioux Falls, South Dakota against the Skyforce (Miami Heat).

Rodriguez, acquired via trade from the Houston Rockets’ affiliate Rio Grand Valley Vipers in December, has started 12 of the 13 games he has played in since coming over, contributing 10.4 points, 3.9 assists and almost 2 steals in 27 minutes per game. He was the starting point guard for the Vipers this season and averaged 16 points, 5 assists and 2.5 steals before the trade that sent Josh Huestis’ returning player rights to the Rockets G-League franchise.

When the 2020 Olympics take over the news cycle this summer, the San Antonio Spurs organization will be well represented, on Team USA and rosters around the globe.

It should come as no surprise that the international talent roots of the “United Nations of Ball Movement” extends even deeper to their G-League affiliate.